It’s hard to sum up Lucy Verde Roze in one article when you could write a whole book. She’s been described as an activist legend, Earth Goddess, global citizen, animal rights artist and much more, all with good reason. From the savannahs of Africa, connecting with elephants and buffalo to the rural pastures of New Zealand, protesting against animal agriculture, Lucy’s animal rights activism has already taken her on a huge and amazing journey. However, she is far from done. At the time of writing, Lucy has just landed in Dublin, Ireland to embark on a speaking tour of the UK and Europe, where she will be sharing her passion for spiritual activism with the world.

‘As well as Ireland I’m also presenting in England, Armenia and Lithuania, with Morocco possibly also in the pipeline. I’ll be working alongside some of my greatest inspirations, including Seb Alex and Joshua Entis, running workshops for activists on self-care and meditation for liberation through my expanding activist group, Paradise Rizing’, she says, excitedly.

In these workshops, Lucy will be speaking on animal rights, activism and why she feels that aligning both of those with our inherent spiritual nature is so important. ‘Spiritual Vegan Activism. These three work together’, she explains. ‘Two of these, most of us in animal rights already love and hold dear. But did you know that the philosophers of religion have had a lot to say on the (un)ethics of eating animals? That science has a major part to play in spirituality? Or that spiritual gurus have been some of the most badass activists of all time? The greatness of a nation and its moral progress can be judged by the way its animals are treated. We have a lot to learn from people like Ghandhi and other such spiritual gangsters’.

Having spent the past two years devoting herself full time to speaking out for animals, Lucy knows all too well the need for activists to make time to care for their own physical, mental and emotional needs. ‘I call it active spirituality’, she says. ‘The extent of knowledge we have as vegans can be hugely overwhelming. Living in this world which is not just vegan, being around people who don’t understand can be incredibly draining. Stemming from my degree in Psychology and post-grad in The Arts, a large part of my focus is on helping activists heal themselves from Vystopia and trauma, often using creativity, so they can be as long-term and positive in their activism as they can be’.

Lucy credits her daily meditation with helping her prepare for, and get through many activism events, including one particular incident where she was physically attacked by a member of the public whilst leading a peaceful protest at a New Zealand dairy farm. ‘We went there with peace in our hearts and were actually leaving when a woman attacked me from behind and began clawing at my neck, pulling out my hair and digging her nails into my skin. It was almost like she was trying to pull my tattoos off. She was very aggressive and violent and I don’t think I would have dealt with it the way that I did if it wasn’t for my meditation practice. It can be hard to keep your cool out there but meditation really helps with that. It’s a common tendency for people to see meditation as completely passive, and that’s something I used to think too, until I dove into it and really experienced the benefits. Now I have a much more wholistic view. Activism, meditation, yoga and eating as whole foods as possible are probably the most important aspects of life that keep me feeling mentally and physically strong.’

Lucy is quick to stress however, that the practice of spiritual activism is not limited solely to animal activists and vegans. ‘It’s for all beings. I feel that we all can and must connect with our higher selves, to bring our lives more into alignment with our core values, liberating ourselves alongside those we seek to save. The science behind collective meditation and the power of our thoughts is strong, I’ll be sharing much of that online with my workshop and showing how it all ties in together. I’ve been working on creating self-help resources for vegans and activists, which I’ll be building on and using as the basis for community support projects I have in the pipeline. This, I hope, will in turn speed up the process of total animal and human liberation’.

Lucy’s own spiritual activism journey first began in Cambodia, where she learned the meditation technique of Vipissana. From there, she moved to Melbourne and joined the core Cube of Truth there, before going on to set up many more Cube chapters in Australia and across the ditch in New Zealand. From Direct Action to helping run rodeo protests, document food-court and meat-fest disruptions, marches and attempted open rescues, she hasn’t stopped. ‘There have been so many incredible experiences, working with such inspirational and dedicated people. Speaking and running a meditation workshop at Rainbow Serpent was a huge gateway into a new world of possibilities. Finding all these amazing communities of activists whose paths are so aligned with mine, especially those of Newkind, Escape Human Zoo, and One Temple (which I’m working on with several friends globally), has been such a rewarding part of my journey’.

However one of her proudest creations to date is the spiritual activist group, Paradise Rizing. ‘We are a group dedicated to vegan love and activist self-care’, Lucy explains. ‘We meet to share our struggles, meditate together with visualisations that I guide and help each other heal into truly effective activism long-term. As activists, we feel the urgency of saving those suffering, and the need to translate their pleas for mercy into a language that others can comprehend. The very fact we need to do that can be extremely painful in itself, as well as all the other difficulties that come with knowledge of the systems of exploitation we see around us every day. We need a place that’s warm and healing to maintain a positive outlook on life. This is that place’. Joining the Paradise Rizing Facebook page also enables members to access invaluable online self-care resources to support, guide and help maintain their overall wellbeing.

‘Meditation for animal liberation is helping people connect with their higher spirituality and the universe’, says Lucy. ‘It’s a snowball, things are changing. What I love most about what I do is the knowledge that I’m doing my absolute best to bring a bit more light into the world. This is what I was born for and until the world knows peace, regardless of how hard this is, I couldn’t live any other way’.

For the past two years, Lucy has led a nomadic and minimalist lifestyle, which she loves and helps to keep her living costs and environmental impact as low as possible. ‘I do house sitting and look after animals in people’s homes, moving on the whole every couple of weeks. My meals are cheap and mostly raw, I use public over-land transport as much as possible and have minimal possessions’. She also does acting and modelling to help fund her mission, and is an incredibly talented artist. Even so, she admits, full time activism is a massive financial struggle. ‘I don’t charge huge amounts for my art and although I keep my costs to the absolute minimum, I do need to pay for food, transport, costs of equipment, art supplies and printing of my resources. I’ll still be drawing and painting alongside my workshops and events for anyone wanting artwork of their animals or any other vegan art in their homes and I also have a Patreon page. All support is massively appreciated’.

To learn more about Paradise Rizing and Lucy’s speaking tour, as well as her exciting new self-help resources for activists, follow her at: 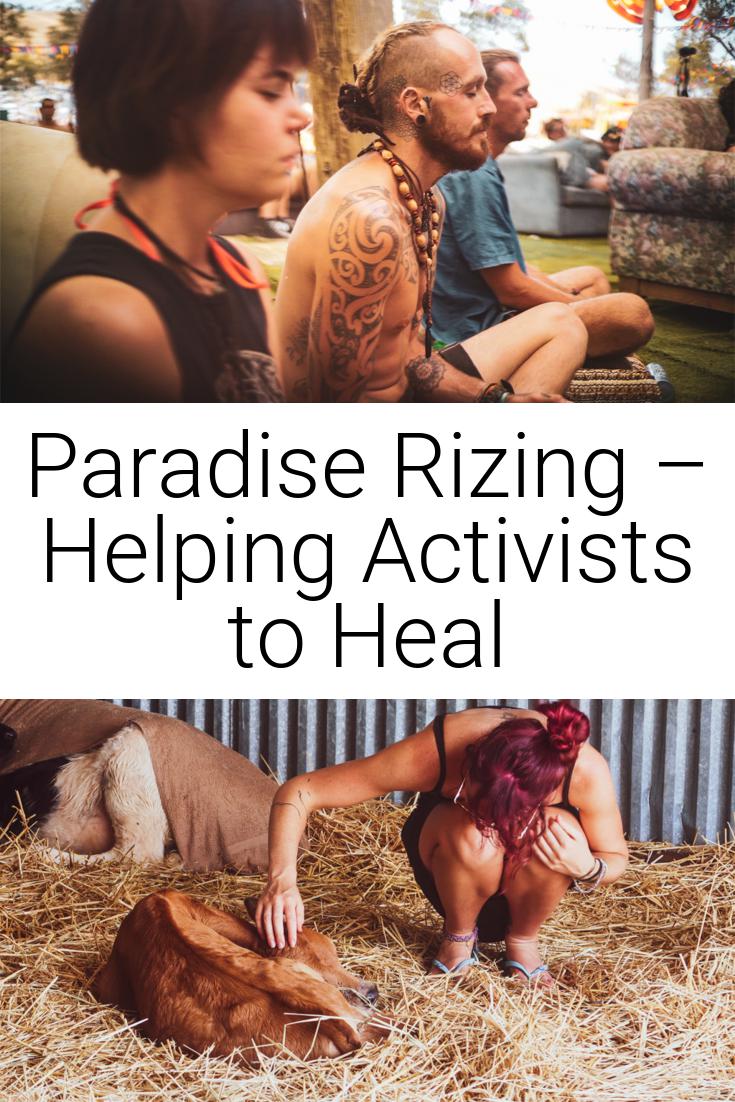