Growing up in a rural area is idealic to many. Being surrounded by nature, having room to roam, having fresh air to breathe and animals to play with has all the makings for an amazing childhood. However, for animal lovers, there is a dark side to growing up rural, and the victims are found locked outside or at the end of a chain.

Animal activist Tamira Thayne says her rural upbringing, where she first witnessed dog chaining, is the root of her life’s mission.

“We lived on a farm and our black lab would run the farm, but our beagle Maggie would stay chained. I always pitied her. It made me sad, we never petted her, she was always stinky and crazy because she was on the chain,” Tamira said.

In fact, thousands of dogs live their whole lives on chains, all the while developing aggressive and territorial behavior due to their frustration and lack of socialization. When humans domesticated dogs over 10,000 years ago, they became dependent upon us for their basic needs, but they also look to their human companions to fulfill their social needs as well.

“In my 30’s I bought a house near a chained dog, also a black lab, and his name was Worthless. That was truly his name. I watched that dog for six years. It ate away at me,” Tamira recalled.

For Tamira, the early exposure to her chained beagle really struck an emotional chord. But it wasn’t until years later, after watching Worthless suffer, that she came to terms with her mission in life: fighting for chained dogs.

She Began By Talking to People

Talking to locals and driving around with a sign in her car eventually turned into a non-profit organization called Dogs Deserve Better. DDB’s mission is “to be a voice for chained and penned, abused and neglected dogs.” (www.dogsdeservebetter.org).

One of their first dogs to be rescued was the black lab, formerly named Worthless, that Tamira helplessly watched for six years. Though he was old and only had six months with Tamira, his life ended knowing love and the comforts of home.

“He was such a nice dog, he was just an amazing dog. I was so glad I got to give him that gift because watching him was just so frustrating,” Tamira said of Bo’s six months with her.

Most of the people that Tamira talked to about dog chaining in those early days agreed with her, but felt there wasn’t much they could do about it. There is a long history and culture around it and it isn’t easy to break the cycle.

Tamira said, “It has something to do with the mental attitudes about animals just being things, just being property.”

Surprisingly, as Tamira spoke with dog owner after dog owner, they all claimed to love their dogs, yet they kept them chained up constantly.

“I have talked to thousands of people who chain their dogs, and every single one of them claims to love their dog, but if that’s love, it’s not an appropriate kind of love.”

DDB wanted to turn that property into something positive for dogs. Today, you can visit the trees planted in honor of each of Michael Vick’s victims, or visit their photos still hanging in the lobby. Their mission to fight for dogs continues, though Tamira has moved on.

“I was really struggling with burnout, compassion fatigue and PTSD,” Tami said, “you can only put up with so much before your psyche starts breaking down and I felt like I went as long as I could.”

Tamira walked away from DDB and began to rethink how she could still make a difference for animals, while also taking care of herself.

After some soul searching and reflection, Tamira realized that she could still advocate for animal rights. Wanting to break the cycle of abuse and neglect for all animals, Tamira began a new venture in writing and publishing.

In 2016, Tamira started Who Chains You Publishing. The publishing company’s mission is “to amplify the voices of the animals through the empowerment of animals lovers, activists, and rescuers to write and publish books elevating the status of animals in society.”

“My goal was always to break that cycle, you know it goes down through the family. Because their father did it and their grandfather did it, they think it’s ok,” Tamira said of educating people with books.

Who Chains You now has over 50 books, mostly written for children. Some of their titles focus on rescue stories, others teach about current animal rights issues and some even have a paranormal twist! To see all of the books available through Who Chains You Publishing, or to learn more about Tamira, visit their website at www.whochainsyou.com.

While the chains haven’t been completely broken yet, there are new laws passing for animals all the time, so there is a lot to be hopeful for. There is definitely a lot to keep fighting for, one page at a time. 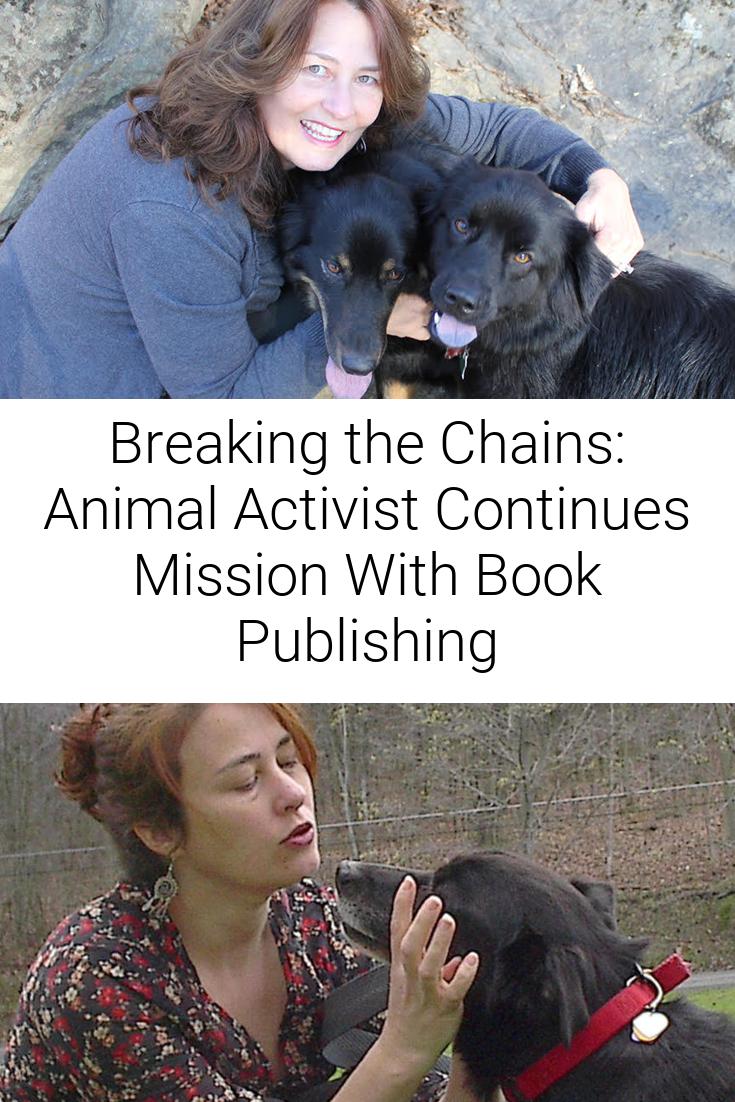