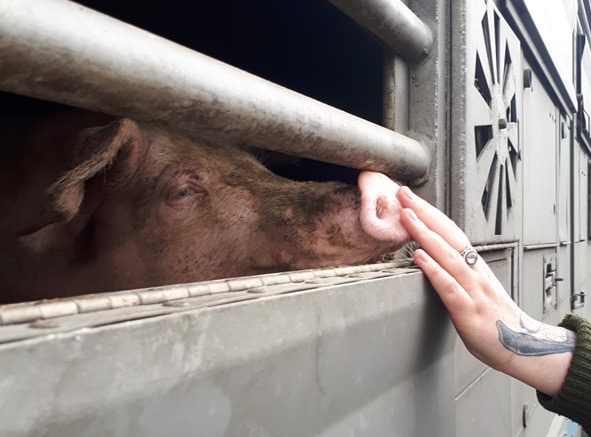 Being vegan is far from easy. Finding delicious things to eat? That’s the easy part – there are countless innovative options popping up for us all the time. It’s the knowledge that is the hard part. Knowing the horrific abuse animals and their babies are suffering, every second of every day. Watching our loved ones putting food into their mouths which we know is harmful and affects their health and longevity. Day after day, as individuals and as a movement, we are constantly faced with this knowledge; particularly on social media, where we are bombarded with distressing images and tales of cruelty and apathy that leave us shocked and outraged at the human race. It makes us want to save the world. It makes us want to stop the torture and abuse. It makes us angry at the selfish and greedy organisations who feed our society with lies in order to make money out of exploiting innocent, docile beings. It makes us feel overwhelmed, powerless and despairing that we can’t just make everything better, right now.

For many of us, we just can’t take it. Almost every day I see a post appear on my Facebook newsfeed from a fellow vegan who is taking a break for a while, as they just can’t handle the constant reminders of all that is wrong with the world. We carry a heavy burden, and sometimes that weight is too much to bear. I am one of those people, who wants to save the world and often becomes overwhelmed. I can’t understand why carnists can’t see – or don’t want to – what, or rather who their burger or beloved bacon used to be. A sentient being with a soul, a family and emotions, just like us. I can’t understand how people can willingly condone and contribute to this cruelty, just so they can have milk in their coffee, or a ham sandwich. Social media is often incredibly frustrating for vegans. I have over 3,000 friends on Facebook. I can post a picture of myself, a flower or a nice sunset one day and get hundreds of likes. The next, I’ll post something about veganism or activism and be lucky if it gets eight. People don’t want to see that stuff you see, it just ruins their day. But don’t ever stop posting. No matter how soul destroying or pointless it may seem at times, we all need to keep posting.

After all, it was a Facebook post which spurred me to become vegan. A friend of mine, a vegan of 25 years was always posting things about animal cruelty. I’d scroll quickly past every time they came up, I didn’t want to see that! Often it would be the first post I’d see when I opened up my newsfeed in the morning and immediately it would put me in a negative mood. So many times I seriously thought about unfollowing her. But one day she posted something which resonated with me. I can’t even remember what it was, but I just looked at that post and thought to myself ‘I can’t be part of this any more’. I went vegan that very day, just like that. I told my husband of my decision and he said ‘That’s great, I’ll support you, but I’ll never do it myself, I love my meat and cheese too much’. Five days later however, he overheard ‘Forks Over Knives’ while I was watching it on the other side of the room. He also became vegan overnight and 12 months later my mother-in-law did too. All this came about as the result of a single Facebook post. So don’t be disheartened or think that your posts don’t work, they do.

Even so, once you know, you can’t un-know. And the more we know, the more we want to do about it, to the extent we become increasingly fragile and burnt out. I burnt myself out twice, once in 2017 and again in 2018. I was no James Aspey or Earthling Ed either, just a humble writer trying to make a difference and taking on far more than I was physically and mentally capable of. The same threatened to happen again recently, and much worse than the previous two. I knew I was headed for a complete breakdown and it scared me. I was scaring my husband too.

Serendipity came to the rescue in the form of a fellow activist by the name of Lucy Verde Roze. She had spent the past two years devoting herself completely to animal activism. Cubes, anti-rodeo and dairy farming protests, vigils, she had done it all and was about to embark on a speaking tour of Europe, doing outreach along the way. I was in awe of her achievements but I was even more in awe of her calmness and positive attitude. How did she manage to put herself through such a punishing schedule and still stay so upbeat? As I learned more about her, I learned the answer. (through this podcast) https://strongbodygreenplanet.com/e548-liberation-through-meditation-with-lucy-verde-roze/ Lucy knew how to look after herself properly; mind, body and spirit. Not only that, she wanted to share her secrets with the world, to enable other activists to do the same.

Lucy told me of her brand new self-help resources for activists and encouraged me to take a look. Curious, I first decided to check out her ‘Burnout Rating Scale’ – 10 quick and painless questions which assess your current physical, mental and emotional state and how likely you are to burn out, according to your answers. I had a feeling I wouldn’t score particularly well here but was stunned when my score was through the roof. ‘You need to take action immediately – your health and wellbeing are threatened’, I was advised. Was I really that bad? Yes, I was. I knew it, but just hadn’t wanted to admit it. Like many people I’d just been telling myself I was overreacting and it was all in my head. Take a concrete pill and harden up.

That Burnout Rating gave me the wake up call I urgently needed. I had to start looking after myself better – but how and where to start? Lucy also had that covered, in her Activist Self-Care resource sheet (link to https://drive.google.com/file/d/0BxBOjgLNFraBX2xLTldCc1l4dWV2cU1faEYyLWZGR0IxUUIw/view?fbclid=IwAR0Wl7tIwItR5Lxaq4e0D_6AmVW2egZqB-6e0Sg8Ftu2bMKSKDiz9eiAa3E )

It was evident from interviews with Lucy that meditation was a vital part of her daily routine. Practising mindfulness enabled her to remain calm and level-headed in the most intense and emotionally charged situations, such as at a dairy farm protest where she was attacked by a member of the public. I liked the sound of that, as I did all of Lucy’s recommendations on the self-care sheet. She didn’t just say ‘Go and do this’, but provided all the information and helpful links to everything so you could get started on whatever sounded appealing, which was a lot. I also really liked her suggestions for ‘Gentle Activism’; super easy ways that burnt out activists could still make a difference and feel productive.

So I tried meditating. I didn’t know what the heck I was doing, or if I was doing it right, I just did as I was told through the guided online meditation and you know what? It worked. From the very first time I felt calmer, so I kept it up. My husband and I did an intense four-day online summit through Lion’s Roar and it was life changing. Meditation is now a vital part of our day too, and has helped to improve all areas of our life. Lucy’s Self-Help Resources for Activists literally stopped a complete breakdown in its tracks.

Which brings me to the real point of this article. If we want to help the animals and make a difference, it is necessary to also invest time in ourselves, just like Lucy. We are conditioned to believe that taking time out for ourselves is a selfish thing to do, but quite the opposite, it helps us to put our best foot forward for the animals. It helps us to recharge and find that inner peace to help us deal with the outside world when it makes us sad, angry and despairing. It helps us deal with confrontation, carry the load, go forward with our day and be calm for others. It helps us to show that we are the level headed ones and it is those who contribute to animal slavery and are opposed to us who are the extremists. When you are doing a lot of events, you need to unload, unburden yourself. Not everyone has fellow activists or vegan friends they can unload to or empathise; we need to find that peace within.

You don’t have to meditate if that doesn’t float your boat, there are many other excellent ideas on the Self-Help sheet, but as far as Lucy is concerned, spirituality, veganism and activism go together. Having dipped my toes in the water and regained my sanity, I wholeheartedly agree with her and am immensely grateful. 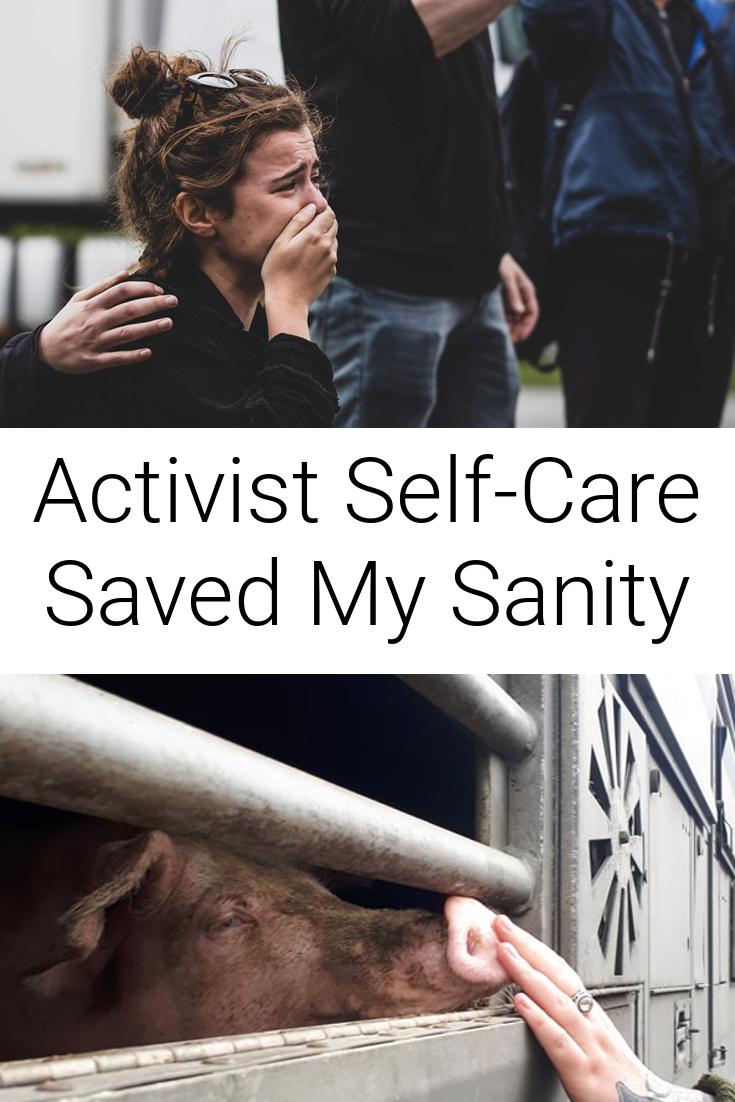