Home Uncategorized A Safe Haven and a New Chance at Life 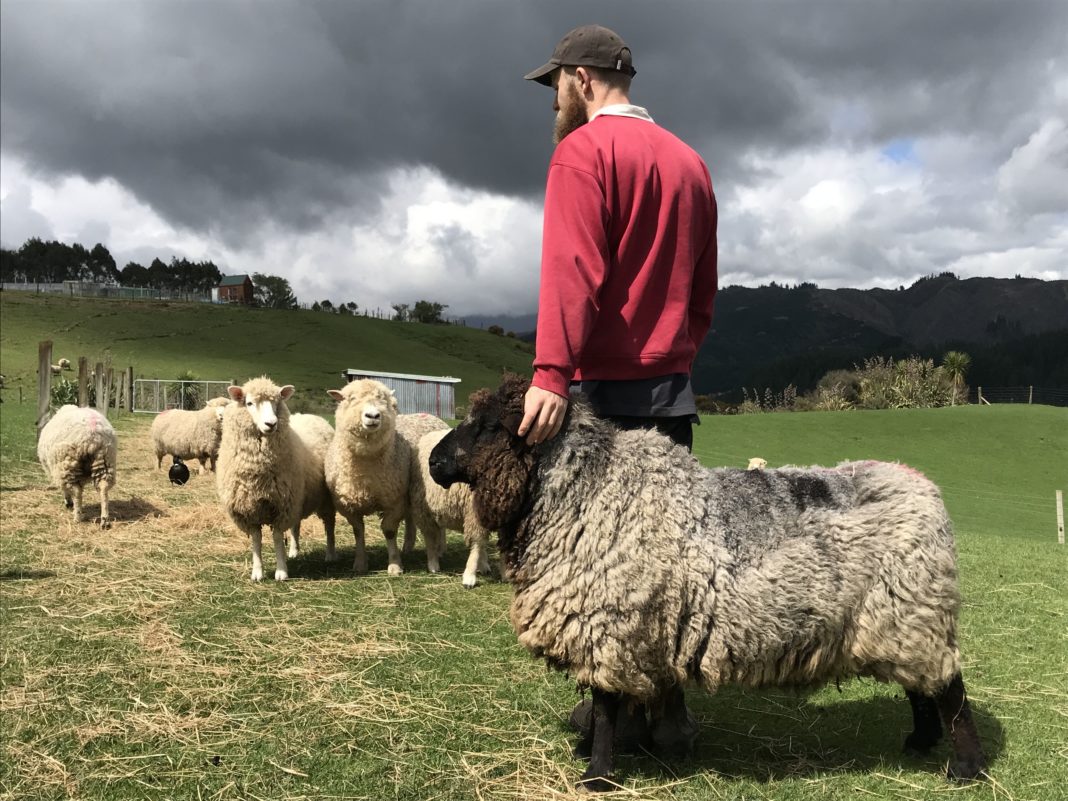 Deep in the heart of the bush, at the end of a gravel road lies 26 acres of tranquil paradise. For the 200 animals who inhabit it, this place is not just home. It’s their safe place, their haven, their security. Some of the residents have been here for years. Others have just arrived, yet will never leave. But for all of them, this precious place and the people who care for them are their whole world, for as long as they need. 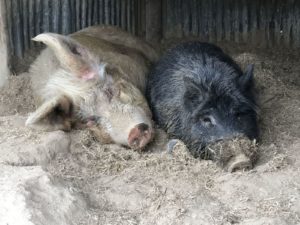 This is the Black Sheep Animal Sanctuary Ōtaki, which offers neglected and abused animals a safe haven, and a new chance at life. Animals such as Merge, a snow-white goat, who is the first to greet us. Rescued from a dairy goat farm, Merge and others like him are usually killed just after birth. Often it’s just because the kids are born male, but as many as 80% of newborn female goats also become petfood or are used for rendering. When people think of the dairy industry, they think of cows, yet there are also around 66,000 dairy goats in New Zealand, resulting in over 120,000 of these beautiful, intelligent and sociable animals being slaughtered every year. Other goats arrive at the sanctuary through neglect, or as orphans whose mothers have been killed by hunters. This is also the case with Toa, a gentle and well-mannered young pig, who loves to be everyone’s friend. 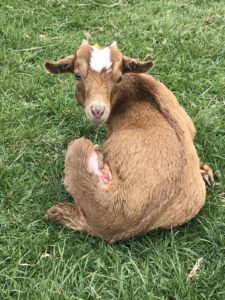 One of the newest residents is ‘Toffee’, a caramel coloured wild goat, who was found alone in the bush wedged in a tree. Instantly our hearts melt at the sweet and inquisitive face which turns to look at us. Our stomachs lurch however, as we catch sight of the horrific injuries to both his back legs, as he sits nestled in the long grass. It’s unimaginable to think what this tiny baby must have endured at just a few days old. If only animals could talk. Mercifully he is now safe and his future looks bright. In just a couple of weeks, Toffee has gone from being completely paralysed to being able to walk and put weight on his back legs. Even so, his road to recovery will still be long. At the time of our visit, the team at the sanctuary were caring for him around the clock, gently tending his wounds and administering physiotherapy every two hours. Even now, it will be several weeks before vets know if both his back legs can be saved or if he will have to undergo amputation. But whatever happens from here, Toffee will be safe forever.

The sanctuary has 10 volunteers who live on site and as Katie, Marley and Greer show us around, it is obvious there is far more to running an animal sanctuary than simply giving the animals a place to sleep and buying in food for them. Buildings are constantly being added to house the growing number of rescues. These are all constructed by the volunteers and made using recycled and donated materials where possible. Other items on the sanctuary’s wishlist include water troughs, corrugated iron, fenceposts, gardening and maintenance tools, wheelbarrows and native tree seedlings, as well as fruit tree and vegetable seedlings. 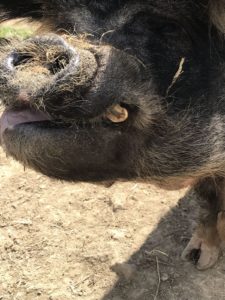 Trotter can see again, thanks to the sanctuary’s care and dedication

Then there are the vet bills, which for most sanctuaries run not just into thousands of dollars, but tens of thousands. There is never a good time for animals to fall ill or develop problems and in the case of those who require high maintenance care like Toffee, the ongoing costs are huge. Take Trotter for example, one of the 10 pigs at the sanctuary. Not all of the animals who arrive at the sanctuary are neglected. Some are the opposite and are literally ‘killed with kindness’, due to lack of knowledge when it comes to animal care. When Trotter arrived, he was vastly overweight due to being fed too much of the wrong type of food. He was also blind. To the sanctuary’s joy however, once he began to lose weight, his eyes were no longer affected by the excess of fat in his eyelids and he can now see once more. He is a happy chap who loves cuddles and is a real favourite at the sanctuary. Sadly however, Trotter still has his struggles. He has a large bacterial carcinoma – a type of cancer – in his jaw, which is unable to be completely removed and recently underwent his third operation to remove as much as possible. Despite the hefty costs of his surgery, Trotter’s happiness remains paramount. ‘All the time he is happy, and enjoys a good quality of life, we’ll do whatever it takes to keep him here’, the team says.

Trotter’s neighbour, Gherkin has also spent his fair share of time at the vet. He was found as a tiny piglet at the side of the road in the middle of nowhere, sunburned and close to death. It is thought he must have fallen from a truck transporting livestock. With an enormous amount of love and care, Gherkin recovered from his ordeal and is a happy chap, about to celebrate his second birthday. Even so, he keeps the team on their toes, as he suffers from seizures and the cost of investigating and treatment of these is high. So if you are reading this and already donate to an animal sanctuary, or are thinking of doing so, be assured that every dollar you donate is precious and gets put towards some very special and lifesaving causes. 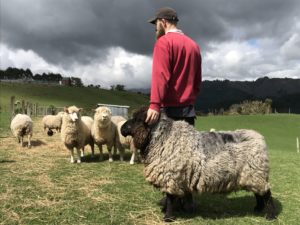 In a country like New Zealand, where the economy depends on the dairy and meat industry, there are many animals in dire need of care and protection. The Black Sheep Sanctuary rescues and rehabilitates cattle such as Iris, a sweet natured ex-dairy cow and handsome Sirius, a former bobby calf who was saved from becoming one of millions of newborn calves sent to slaughter every year. There’s Doris, an ex-factory farm pig and many battery chickens who are now happily liberated, as well as roosters who live together in (quite literal) harmony at the back of the sanctuary. As for sheep, Sparkles, Carla and their woolly friends love cuddles and wander up to say hello. Every year millions of adult sheep are killed in New Zealand for their meat and over 21 million lambs are slaughtered. As Sparkles leans in to me heavily for a scratch behind the ears, I thank heaven she will never be one of them.

It’s not just cats, dogs or farm animals who rely on sanctuaries for their very survival, however. Other animals you may not expect, the Black Sheep also raises awareness of, such as the rats they have rehabilitated and successfully rehomed as loving pets, after being rescued from vivisection laboratories. Horrifically abused, they are often used in experiments relating to intelligence, learning or drug abuse. At Victoria and Otago Universities, scientists force rats and mice to swim until they are close to drowning, in an attempt to model depression in humans. Another researcher has also performed MDMA and cocaine experiments on rats. Such procedures are shockingly cruel and unlikely to produce significant benefits for people, being biologically, psychologically and genetically very different from humans. 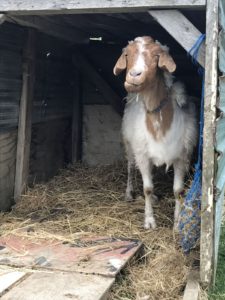 Every animal at the sanctuary has their own story

From Casper the cockatoo, to Teapot the piglet and everyone in between, it’s both heartwarming and heartbreaking at the same time to be in the presence of these beautiful animals, each with their own story. Without the love and dedication of the Black Sheep team, and the Animal Protection Society who purchased the land 10 years ago to set up a sanctuary for animals, none of them would be here. ‘Every animal rescued is a symbol of hope and liberation’, they say. How right they are. There are so many shining examples here of love, triumph over adversity and above all, hope. We will not forget any of them.

For more stories and information on the sanctuary, you can keep up with the latest news, photos and videos at http://www.theblacksheep.org.nz/ or via their Facebook page by searching for Black Sheep Animal Sanctuary Ōtaki.

If you would like to support the sanctuary, there are several ways you can do so. You can:

Make a donation to the sanctuary Give a Little page https://givealittle.co.nz/donate/org/blacksheep

Sponsor an animal. You can either sponsor an individual animal, or a group, such as pigs or chickens. More information at http://www.theblacksheep.org.nz/sponsor.html

Merchandise. All kinds of branded goodies from tea towels and totes to clothing and badges is available from http://www.theblacksheep.org.nz/merchandise.html

The sanctuary is run by volunteers, so all donations go directly to caring for the animals and promoting animal rights. 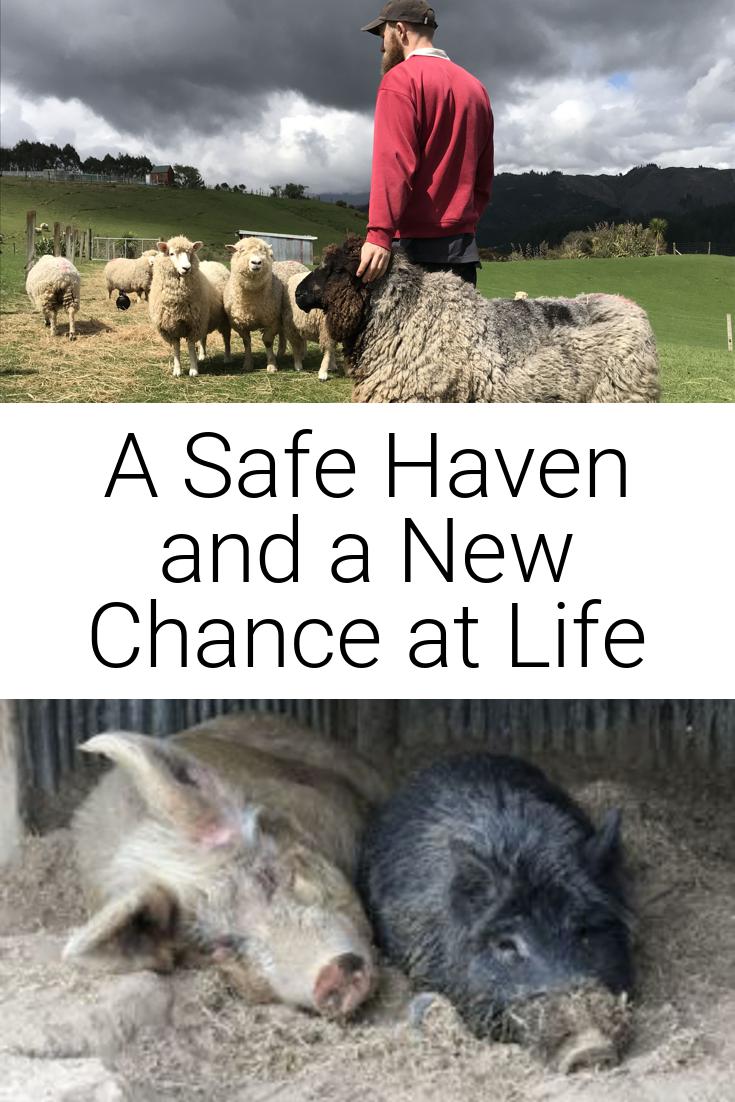