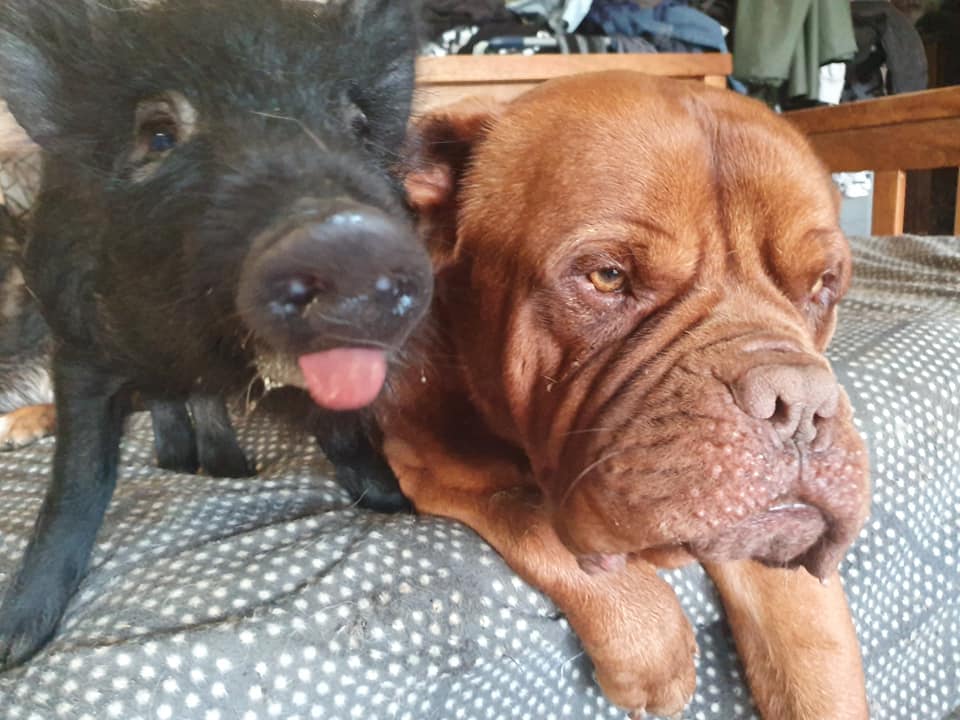 There’s no doubt we are in the right place. Ducks and rabbits mooch around completely unperturbed as we hop out of our vehicle, and as the large gate at HUHA animal sanctuary swings open, we are greeted by a large and enthusiastic welcoming party. An enormous red dog lollops towards us, wearing a huge smile, followed by an equally friendly two-legged dog, a tiny foal and a very excited young pig, who immediately makes a beeline for my legs, prodding them insistently with his inquisitive snout. Behind them all is their adopted mum, guardian angel and founder of HUHA, Carolyn Press-McKenzie. 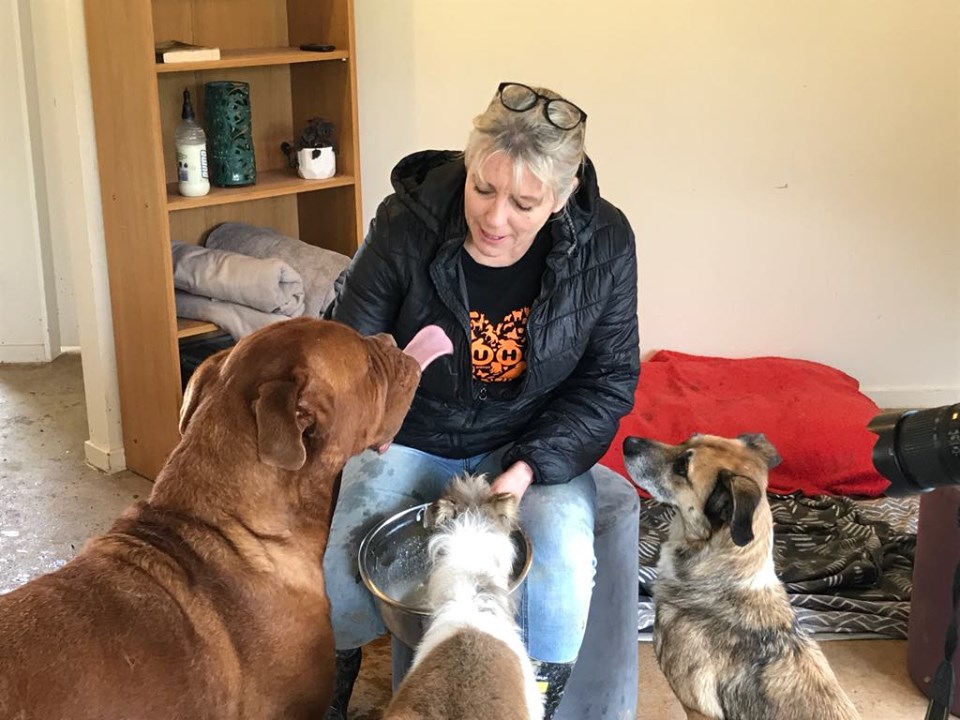 Carolyn gives Skippy his breakfast, ‘helped’ by Reg and Budgie

‘That’s Bret McKenzie’, she smiles, referring to my leg-nuzzler. ‘We thought we’d better name him after a Kiwi comedian. Ricky Gervais and Miranda Hart are already up on the hill’, she nods towards two more fully-grown pigs in the distance. ‘Isn’t this weather dreadful? Let’s all go inside and get warm’. We follow our merry band down to HUHA headquarters and settle into the lounge, horse, piglet and all. A cosy fire warms the room and before long everyone is relaxing in front of it. All except two tiny goat kids, who are overjoyed at our presence and climb straight into our laps and all over us, smothering us in itty-bitty goat kisses. It is pure chaos and pure heaven all at the same time. 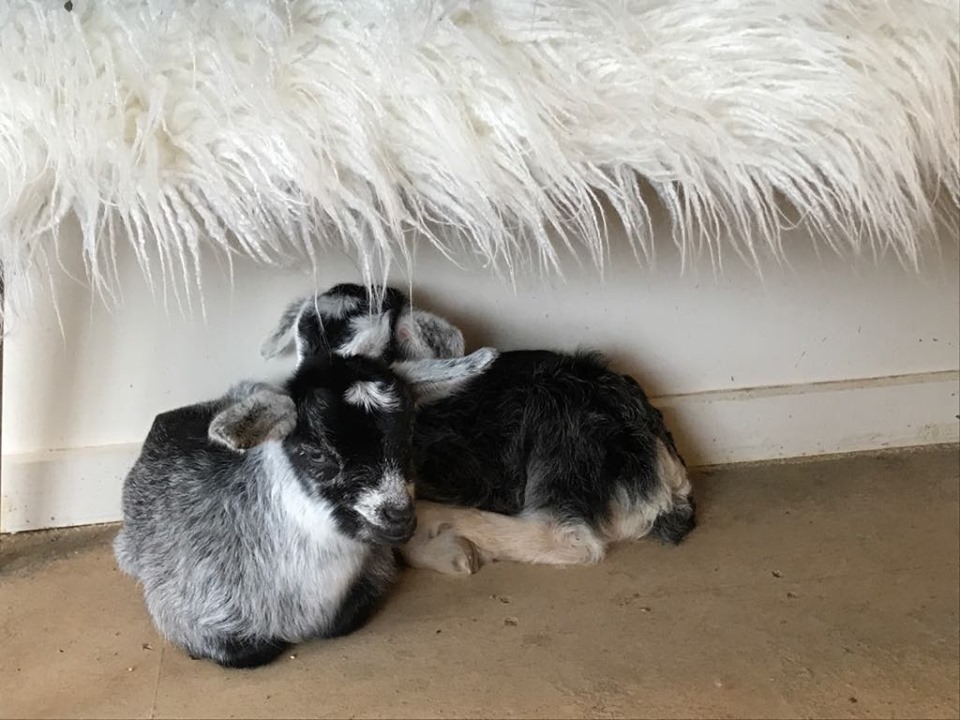 AN OUTPOURING OF LOVE

The goats, newly christened Buckwheat and Alfalfa are the latest additions to the constantly growing HUHA family. Just a couple of days old, their mother was shot by a hunter, leaving them alone in the world. As Buckwheat sits in my lap, sucking on his bottle of milk contentedly, I shudder to think what would have become of them were it not for Carolyn and her team. After almost two decades of rescuing and speaking out for animals there isn’t much she hasn’t seen. You never know when the phone is going to ring at HUHA, or a new drama or rescue is going to unfold and with so many babies, such as the wee goats, or Skippy the miniature foal to care for and feed through the night, sleep is often a foreign word. Yet despite it all Carolyn is calm and smiling. It’s plain to see she has all the time in the world when it comes to the animals in her care.

Skippy snuggled up happily by the fire

Skippy has the most delicate and delightful demeanour, not to mention a very appropriate name as he joyfully skips about, just because he can. He’s one of the more high maintenance cases at HUHA and has required hospitalisation and specialist care more than once. After a tough start to life, he has improved out of sight but isn’t out of the woods yet. This innocent baby’s struggles are a result of overbreeding and inbreeding, which was a bit of a surprise to me. Normally people associate overbreeding and other related issues with dogs, not other species, but this is clearly not the case. Despite his ongoing challenges, Skippy is fearless and his willingness to love and trust is incredibly touching. 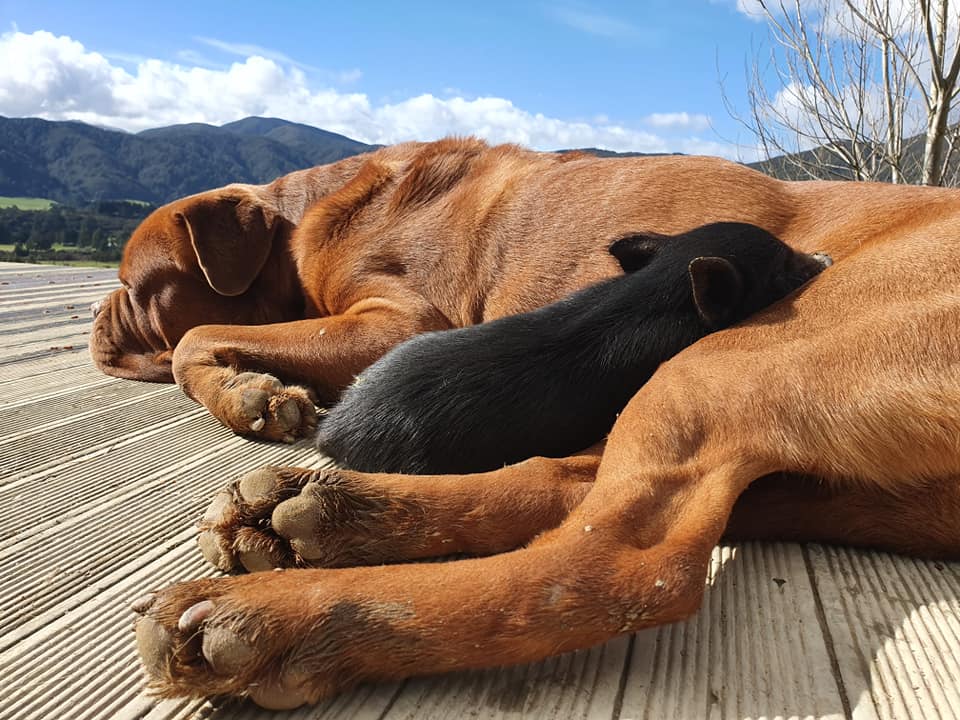 Reg, the beautiful red giant of a dog wanders over and rests his enormous head in my lap, like an old friend. Anyone can see Reg is special, which is how he ended up being rescued. A pedigree Dogue de Bordeaux, he was diagnosed with major health issues at just a couple of months old. He was still a young dog when the pound seized him and was so emaciated and disabled he would normally have been euthanised. Fortunately, his gentle and loving personality still shone through despite everything and he has a forever loving home with Carolyn. Not only that, he has a special purpose at HUHA, acting as unofficial ‘uncle’ to new arrivals at the sanctuary and making everyone feel welcome. Wherever Reg goes, he gives love and receives it in return. 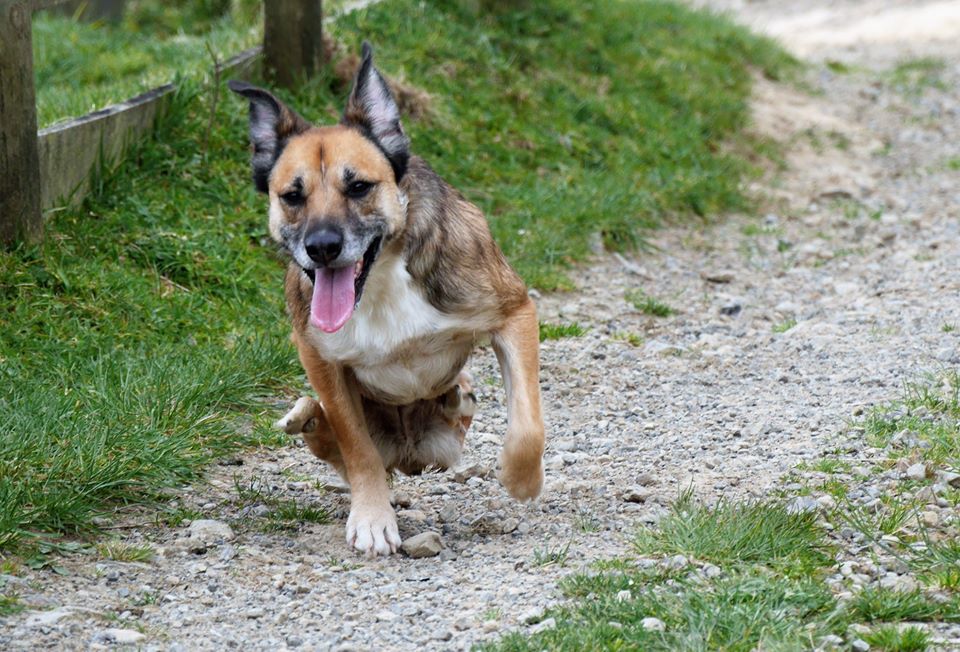 Budgie has no problem getting around on two legs!

Budgie, his fellow canine comrade is no less amazing. Born with malformed hind legs, which are permanently tucked up under her body, she doesn’t seem bothered in the slightest and gets around no problem whatsoever on her incredibly strong two front legs. It’s obvious as she interacts with us all that she never allows herself to be left behind and always goes the extra mile. Her gentle nature, enthusiasm for life and perseverence is immensely touching. I feel a huge outpouring of love for the animals in this room. 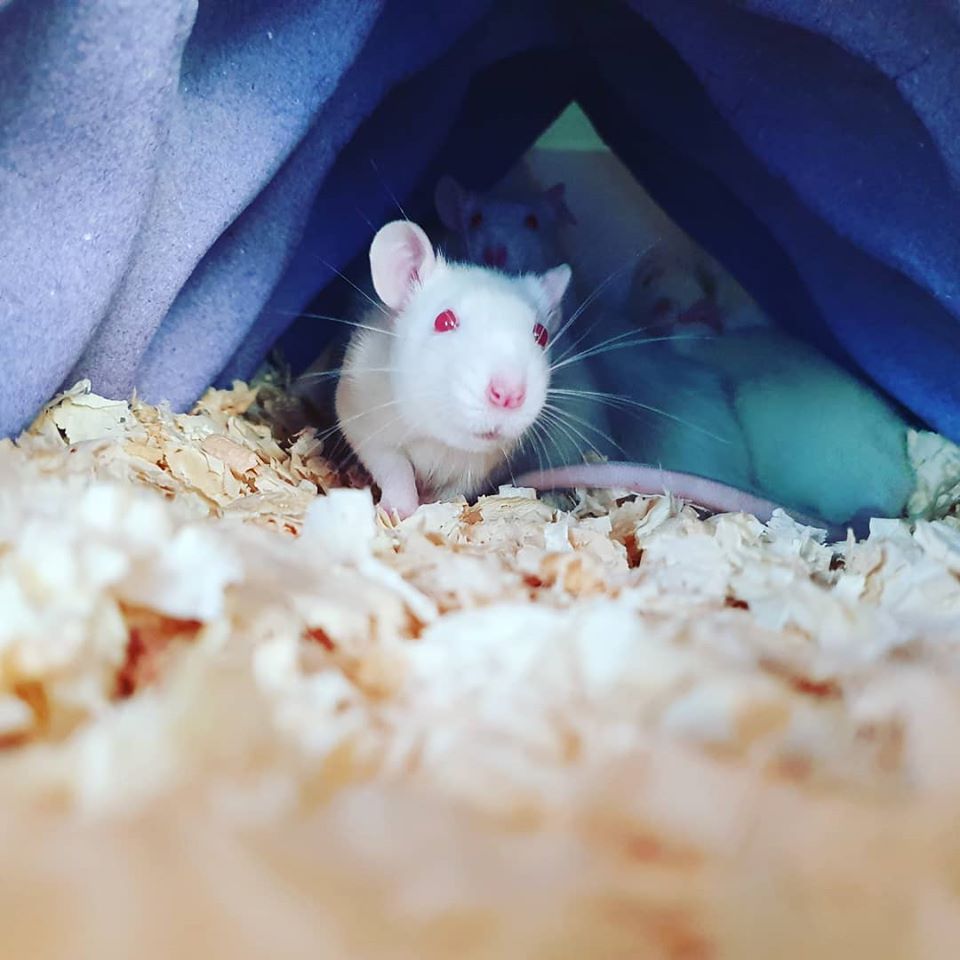 One of many lucky ex-lab rats to find a loving home, thanks to HUHA

‘Do you want to see the rats?’ Carolyn’s assistant Crystal asks, snapping me out of my thoughts. Rats? I’m not too sure, but I follow nonetheless as she leads me into another room. There, snuggled up peacefully together in cosy purpose-built houses and enclosures are a group of large, white rats. ‘They are ex-lab rats’, she explains. ‘They come from universities, who breed them for teaching but were never used. They used to all get euthanised but now they have started releasing them to us, to find loving homes for them. They come to us in batches and we care for them and rehabilitate them until they are ready to be adopted. Rats make such wonderful affectionate pets’. I’d never really thought about that before, but as I observed these docile creatures, with their inquisitive, trusting eyes, I began to see them in a different light. More than that, I suddenly became overwhelmed with horror and sadness at the plight of so many beautiful animals like them, who are not so lucky and undergo unthinkable cruelty in the name of science and research. Thank goodness for HUHA, who along with NZAVS campaigned for their release. It made me feel physically sick, to think what we humans feel we have the right to inflict on other innocent beings. I could feel my eyes filling with tears, and my throat starting to choke up.

Bret McKenzie however was having none of that soppy sort of stuff and sought me out to have another go at my shins with his surprisingly strong snout. Many cuddles later, the rain finally subsided and we were able to look around outside. The HUHA sanctuary at Kaitoke, Upper Hutt is one of several sites where Carolyn and the team rescue, rehabilitate and rehome animals. Another currently houses around 50 dogs. When people think of animal sanctuaries they usually think of animals such as dogs and cats, or horses and donkeys. HUHA is no ordinary animal sanctuary however. Here every life matters. Everyone is given a chance. There’s Deerek the deer, and cattle such as Elvis and Dora, the little blind cow. I was truly touched when she sensed my presence and wandered straight over to me from a considerable distance for a pat. There’s also a blind sheep, by the name of Edelweiss. ‘She loves cuddles’, smiles Carolyn, as she brings her in close and gently strokes her face. The obvious love these two have for one another starts to choke me up with emotion all over again.

Also dotted around the 13 acre property are rabbits, but not the little brown wild ones you usually see. These are large white, domestic rabbits. ‘They’re meat rabbits’, Carolyn says, matter-of-factly. ‘Rabbits which were bred for eating, but are now safe with us’. A friendly emu also wanders up and introduce himself, rescued from the emu oil trade. I never knew much about emu oil, other than it was supposed to be good for the skin. On looking it up when I got home however, I was horrified. As a rule, emus are killed at between 12 and 16 months old. Their oil is then extracted and frozen, before being refined. I’ll spare you the details but let’s just say emu oil is not good news for the emu.

Most surprising perhaps are the monkeys. With the exception of zoos, you don’t expect to see monkeys in New Zealand. However these monkeys have been part of the HUHA family for years and were rescued from a circus. Their stories are heartbreaking but now in their thirties and forties respectively, these beautiful, sensitive creatures are able to live out the rest of their lives in peace and safety, in a specially built enclosure, a labour of love built by Carolyn’s husband, Jim. The couple have never done things by halves and HUHA is New Zealand’s leading ‘no-kill’ animal shelter. They are also in the process of bringing their long-term vision to life. They have recently purchased a veterinary clinic, as well as 157 acres of land to build a new shelter. In time, the hundreds of rescue animals who come through HUHA’s doors can all be rehabilitated in one location, rather than across the country. It’s a massive project, and one where every cent of public support is greatly needed and appreciated. 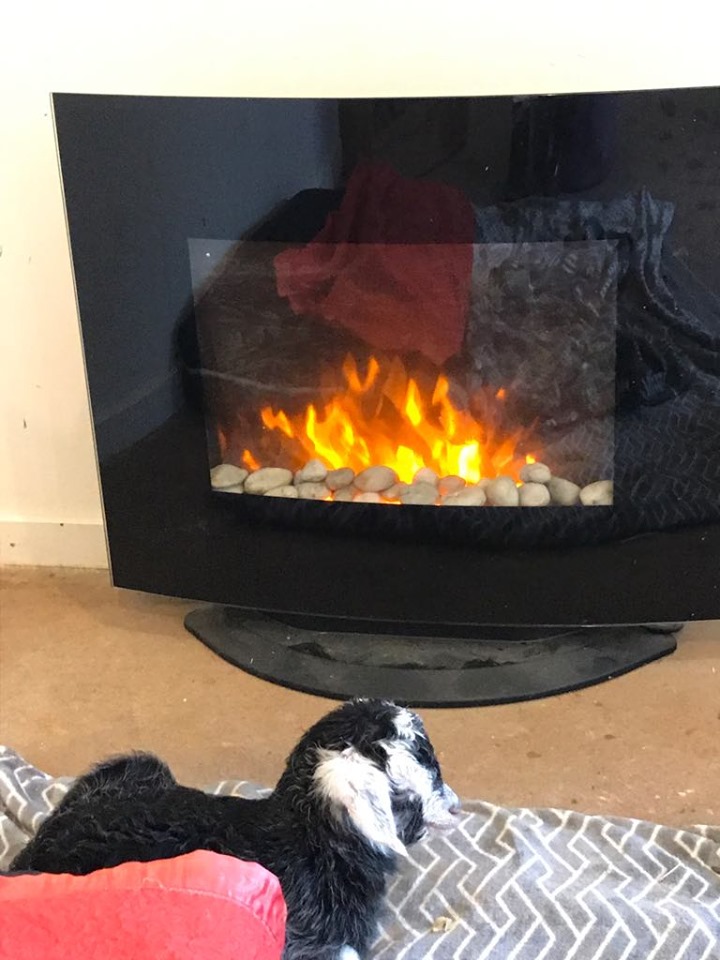 HUHA has big dreams and plans, for all their creatures, great and small

I feel as though I have stepped into a magical world, full of such love and compassion I don’t want to leave. But as the light begins to fade I find have run out of excuses to stay. ‘You should write a book, you know’, I tell Carolyn, as we prepare to leave. ‘I already have!’ she laughs, handing me a copy of her book, ‘Animal Magic’. By the time I have reached the second chapter I have already laughed out loud twice and cried once. Before I reach the end I cry many more times and am filled with anger at the human race and the people who have wronged so many innocent, sentient creatures. But I am also filled with warm fuzzies, inspiration and above all hope.

To help HUHA achieve their dream of building a new shelter, visit https://givealittle.co.nz/org/huha-helping-you-help-animals-charitable-trust
Every dollar counts! 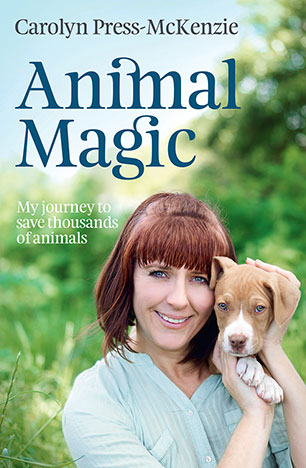 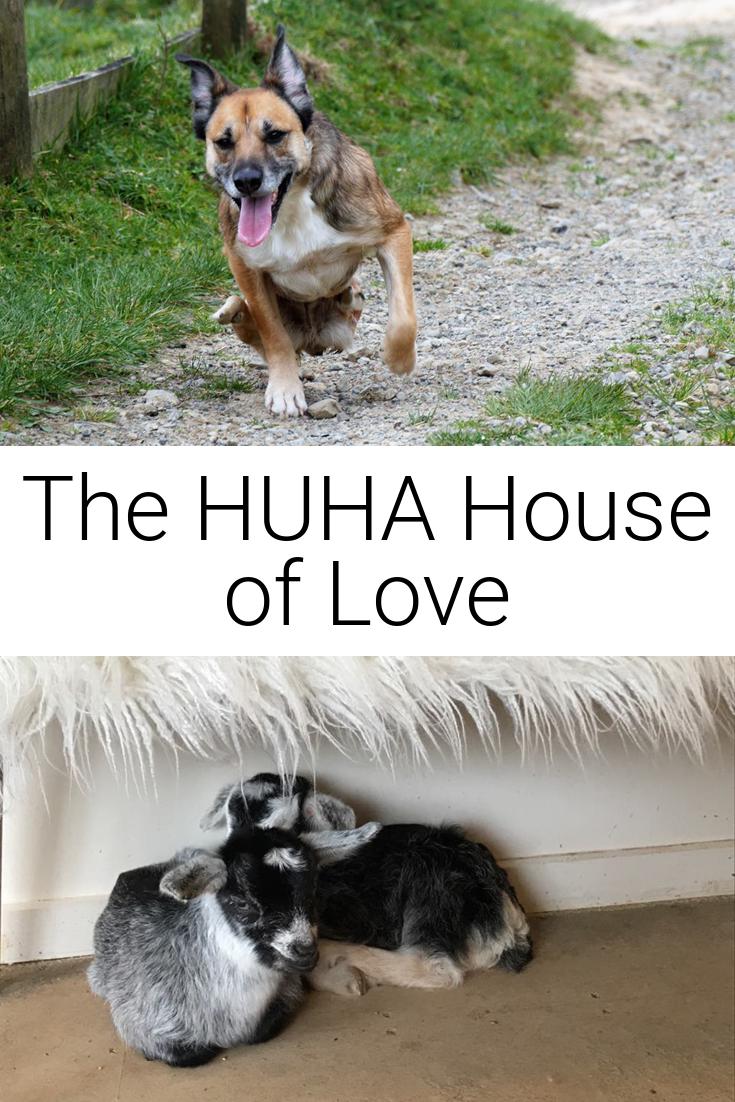