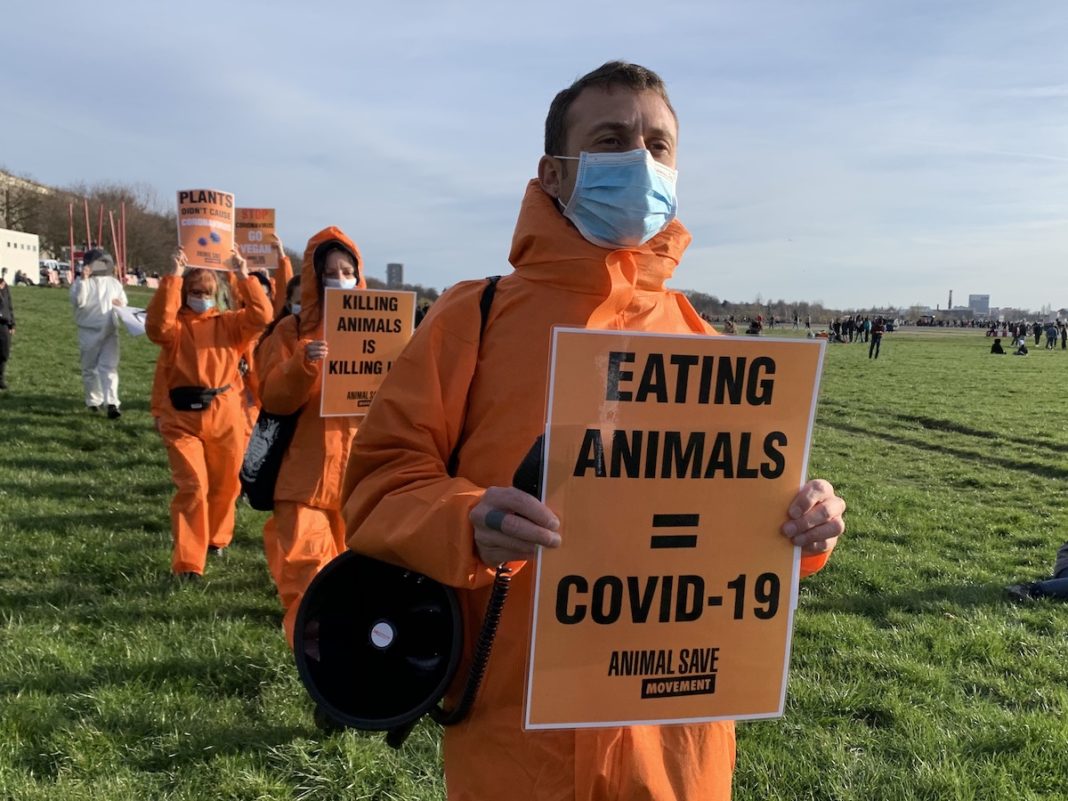 Last week around 20 animal activists from the Berlin chapter of the Animal Save Movement staged a protest to raise awareness between eating animals and the outbreak of COVID-19. They marched through the streets of Berlin and in the subway wearing hazmat suits and masks and carrying signs and banners to inform the public. Below is an interview with Ayse Deniz from the Berlin Animal Save Movement.

On March 15th you staged a protest to raise awareness of the link between the outbreak of COVID-19 and eating animals. What inspired you to do this?

There are so many reasons.

A day prior to the action we went outside to look at the situation. Parks were packed with people grilling dead animals. Not only toilet paper, but also meat, dairy and eggs were sold in supermarkets like there is no tomorrow.

We decided to take action.

Sure, we might be only 20 people, but better we do something, and potentially inspire others, rather than doing nothing.

We took contamination seriously and equipped ourselves.

A crisis like this causes changes in society. 9/11 changed a lot, and so will Coronavirus. We think that it is every anti-speciesist’s responsibility to take part in what direction these changes will be made. Are we going to surveil people and take strickt hygiene measures, or are we going to tackle the root cause? Vegans need to have a say and shift the changes that will be made into the right direction.

I think your protest was really visually striking and sent an important message to the people. What was the reception from the people that you encountered?

On the internet, it got a lot of positive feedback, much, much more than we expected or even imagined. Ours was just a modest attempt to reach a couple of people, it is quite overwhelming how much support and love we received. And I think this needs to be acknowledged by the community. A vast majority of people agree with the message and want it to be heard. Thousands of people are dying and we are still talking about washing our hands. Which is important, but it must be said, that these diseases are linked to our tradition to kill animals. The CDC warns that 3 out of every 4 new or emerging infectious diseases in people come from animals. When are we going to learn?

A few people were worried about us infecting others. We are activists in biosecurity suits and surgical masks addressing the root issue. I think we are the wrong target but we respect it. We agree that it is a good time to stay at home and do activism domestically.

Was the protest difficult to organize with the crowd limitations going on in Berlin now?

Yes. At the time of the protest things weren’t as bad as they are now. But it is definitely a new and more challenging context to organise in. Be it material and equipment, or getting people to act. We did our best to adapt to this new challenge. This has been good for us though, we are learning to be extremely solution-oriented and to overcome limitations in a reasonable and practical way.

How can other vegans at home spread awareness of this kind?

I think that in most places around the world it is no longer possible to replicate this action. In Germany, we no longer recommend doing it. One person in Germany copied one of our placards that says “Plants didn’t cause Coronavirus” and took a picture of herself in the supermarket in front of the meat section. A perfect example of how it is possible to overcome the current challenges and to come up with new ways. You can also do a banner drop from home, or even a speak-out through your window. This is a crisis, and we want a revolution. If every single vegan out there did something, just something, we would achieve animal liberation in a very short time.

What kind of events do you have planned in the future?

It is difficult to answer this question. Things are changing every single day and we aren’t able to plan for the next week, let alone the next month. Decisions and plans are being made on a daily basis. But we remain determined to eradicate the animal agriculture industry and all other ways we exploit and use animals.

Where can people find you to follow more of your activism?

Are you aware of any other Save Movements are doing similar protests?

We have an action manual that we have sent out to chapters, but given the current situation it’s unclear if any chapter will be able to execute it.

If you could send a message to every person in the world about this issue what would you say?

Killing animals is killing us. 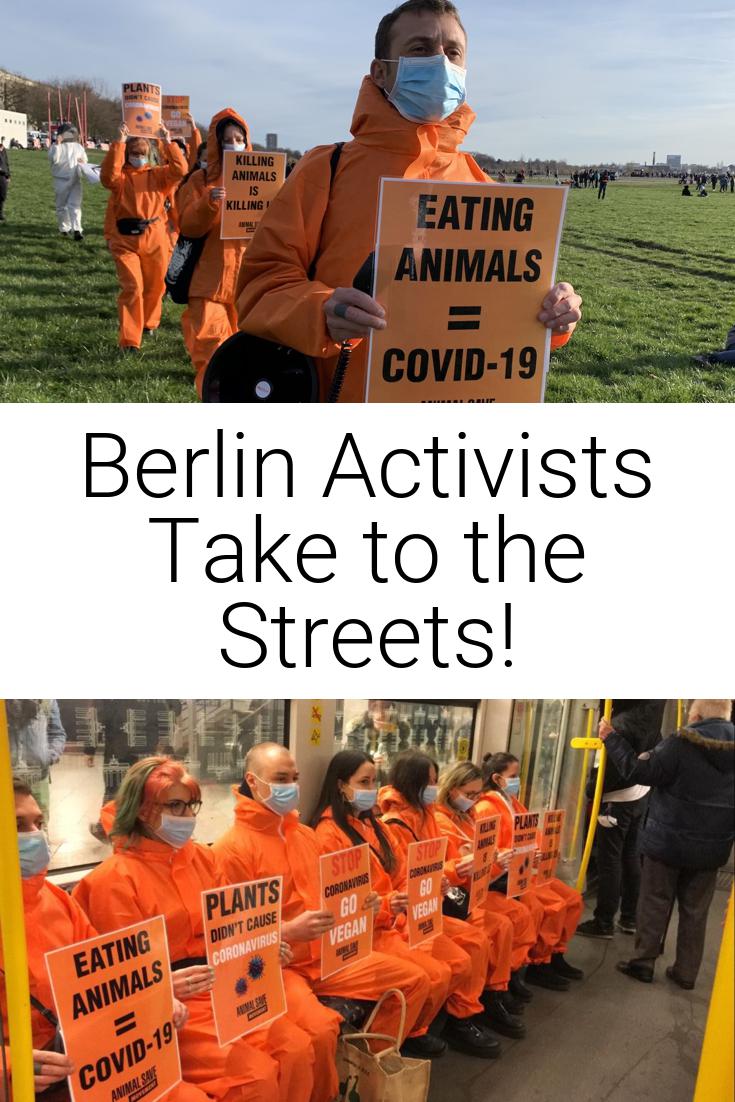