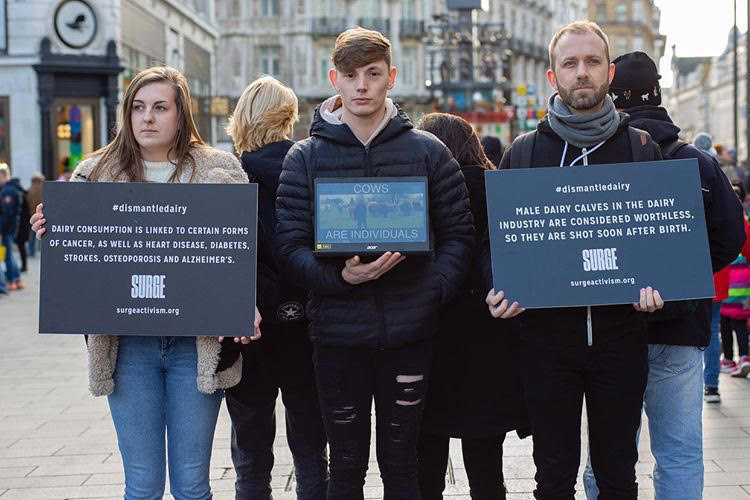 Connor Finch is a vegan activist who is cycling 120+ miles across Essex in order to raise money for Tower Hill Stables Animal Sanctuary, which is home to over 600 rescued farm animals. He volunteers at Tower Hill on weekends and wants to do what he can to help support this amazing sanctuary.

We talked to Connor to learn more about him and his fundraiser:

Why are you vegan?

So, I turned vegan about a year ago now which might not be a very long time but personally I would say I have done my fair share in this time. Firstly, I went vegetarian because I saw footage of animals being mistreated on farms as well as numerous undercover slaughterhouse videos. Little did I know, cruelty is everywhere in the dairy, egg, and clothing industry also.

I researched all standard legal practices such as dehorning, mutilating tails and teeth, artificial insemination, kidnapping babies from their mothers, gassing pigs, killing male dairy calves in their first week of life, killing male chicks on their first day of life, keeping chickens in super overcrowded sheds with less space than an A4 sheet of paper and still labeling this as free range, the list goes on.

The one thing that truly blew my mind was the fact that we have all been in the dark for such a long time and that people were so unaware. Even if people are aware of this horrendous act of abuse, they simply see it as necessary, justified or not abuse at all. How can this be? Personally I think that its due to the conditioning, advertising and brainwashing that has happened over hundreds of years, telling us that we need animal products to survive, that the animals live a happy life, that farm animals are somehow less worthy than a common household pet and that it is okay to view animals as simply a product and not an individual. All animals are just as worthy of life without human intervention as any other being on this earth.

How long have you been volunteering at Tower Hill Animal Sanctuary?

I have been volunteering at Tower Hill now for about four months which again isn’t a great deal of time but as soon as I heard about this place I headed down and spoke to Martin who runs the sanctuary in Asheldam.

What made you start volunteering at Tower Hill Animal Sanctuary?

My girlfriend Charlie and I went to the Plant Power Expo in London and saw a speech by Fiona Oakes who started the sanctuary along with her partner Martin in 1993. Tower Hill also had their own stand where we heard all about the sanctuary and discovered that we only lived 15 minutes away. From then on Charlie and I have been visiting most weekends.

Once visiting the sanctuary the first time, meeting Martin and all of the lovely animals I couldn’t stay away! Seeing how hard everybody works was really inspiring and shows how dedicated they are not only to their own sanctuary but to helping all animals and veganism as a whole.

Honestly, for me it is just so lovely to be in such a positive environment with other passionate and like-minded people. I get involved with multiple forms of animal rights activism outlets such as outreach on the streets and informing the public and attending slaughterhouse vigils where we witness animals in their last moments of life before they are brutally murdered for an unnecessary cause.

Personally, I think that those forms of activism have to be done, simply just to get the message to the world and hopefully raise awareness. I feel like I have a responsibility to try and help these innocent animals in any way I can. I cannot just sit back and let animals be tortured, abused and murdered now that I am aware of the cruelty involved.

Helping at the sanctuary is a great way to add some positivity into it all. You are constantly surrounded by animals who have all been granted a second chance which is a great reminder that veganism as a whole is having an impact. Slowly but surely people are waking up and changing their lifestyles cruelty free. It’s not hard at all once you look into it.

Daily tasks at the sanctuary are probably quite obvious to many, clearing up poo, feeding all the animals, making sure they are all safe and well, cuddling and mainly just trying to give the animals a good life which is free from human exploitation.

What inspired you to cycle 120 miles?

Roughly two years ago I started to get involved with road cycling, I got myself a road bike and began weekend solo rides. I quickly began to improve and loved the feeling of accomplishment after every ride and having something to aim for.

I still cycle very regularly now and have competed in various local events as well as ‘Legs Of Steel’ in surrey which is a brutal 50 miles up many of the steepest hills in the area as well as the famous 100 mile ‘Ride London’ event.

After going vegan and getting involved with different kinds of activism as well as the sanctuary I saw a great opportunity to help support Tower Hill. I truly believe that they deserve the support more than most other organizations purely due to the dedication that Martin and Fiona have.

Feeding over 600 animals is obviously going to be expensive. Each month cost over fifteen thousand pounds just in food costs alone, the sanctuary therefor needs donations, sponsors and fundraisers as a way of helping out with the huge costs involved.

Cycling 120 miles really is the least I can do, it’s all for the animals at the end of the day.

You mentioned Fiona Oakes is a big inspiration for the ride, what is it about her that has inspired you?

To anybody reading this I highly recommend watching Fiona’s documentary on Amazon Prime, ‘Running For Good.’

After watching the documentary, I felt motivated to get on my bike and try to do something for the animals. I really admire the dedication that goes into Fiona’s running and the lengths that she goes too for the animals. How she does all the running and still manages to run a sanctuary is beyond me!

What advice would you give to other people who want to be more involved with activism or volunteering but haven’t made that step yet?

My advice would be to simply just give it a go! Personally, I have found all of the events I have attended through Facebook and pages like ‘Vegan FTA’. There are many groups such like ‘Anonymous For The Voiceless’, ‘Meat Is Murder’, ‘Surge’, ‘The Save Movement’ and so on that regularly post events and updates on their Facebook pages.

From my experience so far everybody at these events all have the same goal and are extremely friendly. I was worried when attending my first outreach and vigil but thanks to everyone involved, I felt very welcome and have made many friends along the way!

When doing outreach there are many ways you can use your passion, for example: Handing out leaflets, showing slaughterhouse footage via Ipad or laptop, holding signs, handing out free samples or chatting with members of the public who show an interest in what you are doing. I find showing slaughterhouse footage and talking to the public very interesting, I love seeing people’s reactions and hearing other people’s point of view, justifications and excuses.

As far as volunteering at a sanctuary goes, just message the chosen sanctuary online and ask if they require a helping hand. Most sanctuaries would say yes, I’m sure!

How can people find out more about you and Tower Hill Sanctuary?

Tower Hill have a facebook page which you can find with a simple search or are available on Instagram (@towerhillstables). Tower Hill post regular updates as well as cute videos on their story which will be sure to brighten up anybody’s day!

If you could send a message out to every person in the world, what would it be?

A pretty simple one really, that we DO NOT need animal products whether that be for food, clothing or entertainment in 2020.

Once you acknowledge that we do not need something it then becomes unnecessary. Therefor we are unnecessarily causing pain, suffering, sadness and death upon billions of innocent animals every single year in the UK alone. If eating meat is a choice, why choose to be cruel?

I would urge people to seriously think about what they are consuming. It’s not ‘pork’ it’s dead pig, It’s not ‘Beef’ its abused cow flesh, you get what I’m saying.

Today is the day that people need to open their eyes to the abuse that happens on a daily basis, what we do to animals is highly unnatural and immoral. It is NOT just factory farms it is happening on every farm. Even without added abuse such as punching or kicking from farmers, standard legal practices such as some I mentioned earlier are simply abuse.

Artificial Insemination is rape, dehorning causes pain, castration also causes pain, mutilations, stealing calves from their mothers so that humans can consume milk that was not intended for us, debeaking chicks and murdering week old male dairy calves. How does that sound okay to anybody?

All animals end up at the same slaughterhouse with a bolt gun though their skull and a knife across their throat or in a gas chamber where they thrash and scream for their life. Humane slaughter is a lie.

I would like to just leave everyone with a few questions to think about and thank you all for reading. Any donations for my Tower Hill fundraiser really are greatly appreciated.

Thank you to Vegan FTA for this interview and I hope you all enjoyed reading along.

My first ever VLOG: https://youtu.be/mgvuXaMy9es 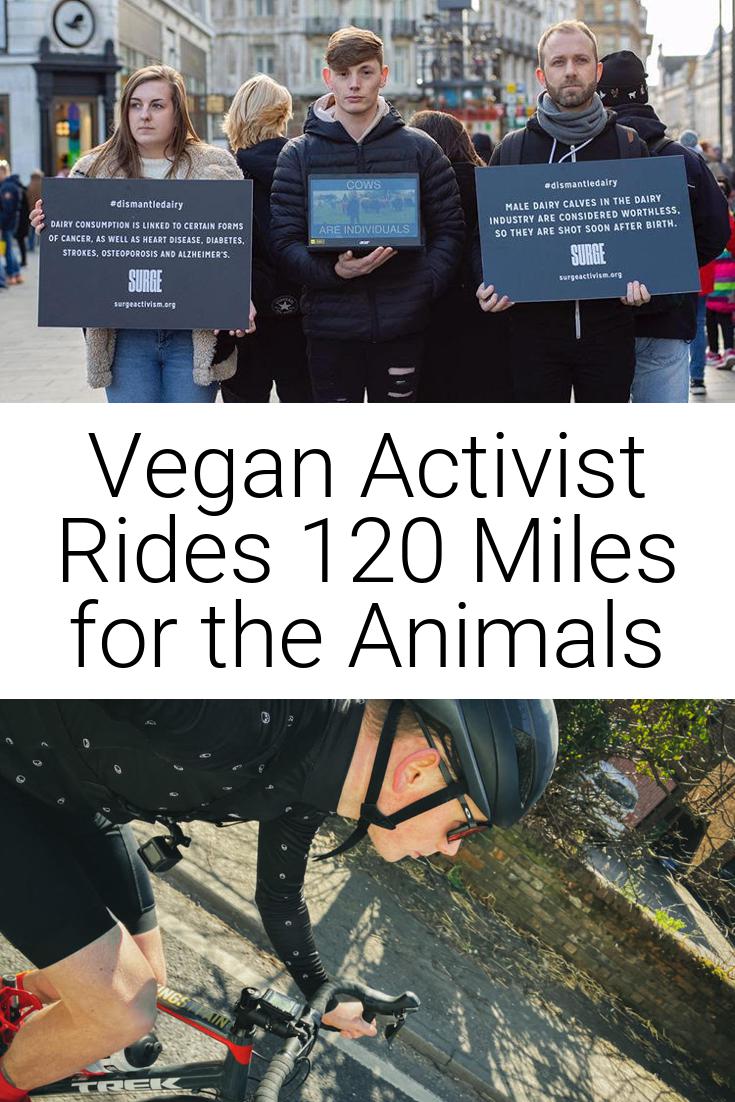