Home Activism Marching For Justice For Animals: An Important Message At Christmas Time 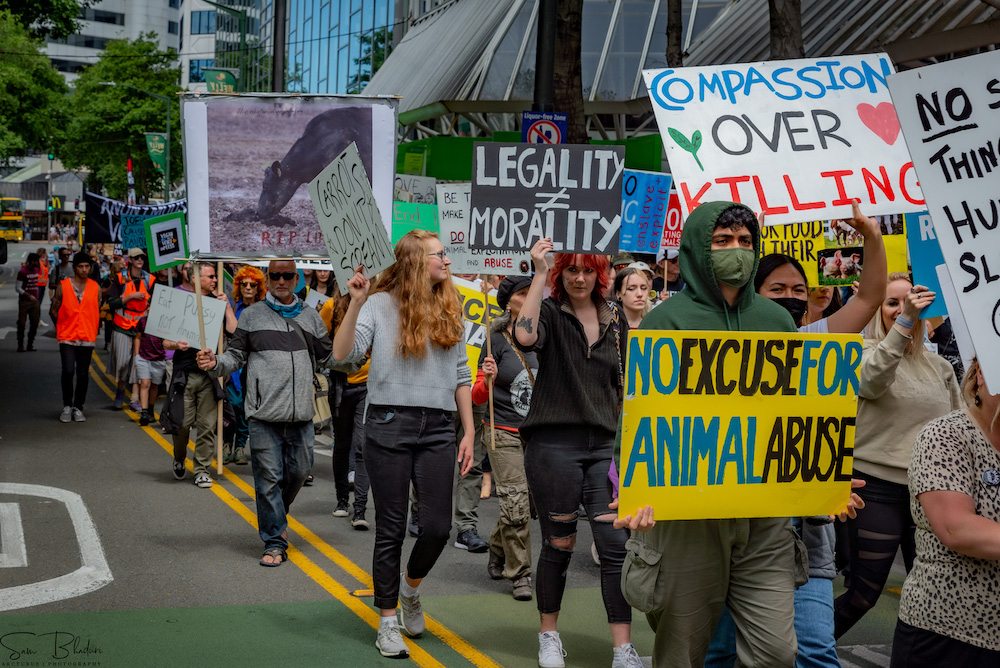 Rudolph with his bright shiny nose was bullied by the other reindeer. They mocked him so much, but Santa (so the story goes) recognised his worth and promoted him to top dog (or deer, if you will).

Rudolph is totally humanised in the story, taking pride of place at the top of the pack of reindeer. He leads Santa all over the world delivering presents to good children sleeping in their beds.

Rudolph is having a right old party. But what happens when Rudolph’s party gets interrupted by hundreds of activists chanting for his rights? Drama and a clash of ideologies, that’s what happens.

Due to a council mistake and a double booking, there was a joining of company when animals rights activists filed into the ‘A Very Welly Christmas’ parade on November 28th. Initially media reports signaled that the drama was deliberate, with hundreds of vegan protestors marching straight through Wellington’s Christmas celebrations.

It was like oil pouring into a stream of water.

While children played in fake snow, and a plastic reindeer nose beamed bright red, there was talk of clashes. The reality is that very little interruption occurred, and it was simply an organisational mistake on the part of the council.

Yet again vegans are painted in the media as raging bores who will do anything to mess up other people’s fun. They don’t want you to have your Christmas ham. And won’t you think about the children and their Christmas being unsettled by vegan protestors?

Yes, won’t you? Our children deserve a world to grow up in. Images of protestors holding up signs calling for justice for animals and abolishment of animal agriculture are hardly going to result in post-traumatic stress. Yet growing up in a world ravaged by climate change (and animal agriculture is the leading cause of climate change) is going to cause immense pain and suffering for our children.

Let’s get real – Christmas cheer is one thing but this could have been treated as an opportunity for people to reflect on the trajectories of their lives and how their lifestyles affect the planet their children are growing up in. Maybe some people did.

Too much? Shall we lie to ourselves and our children and pretend that their future is as rosy as Rudolph’s nose?

Animal rights are not as distant from the values of most New Zealanders at any rate. New Zealanders consider themselves a compassionate nation with strong animal welfare standards. In general, the public consensus takes a strong stance against animal cruelty. It’s just that we frame cruelty in terms of individual acts against animals, rather than looking at the way in which animals are subject to institutionalised cruelty on a massive scale.

The Christmas ham is a case in point. Originating from the Pagan ritual of sacrificing a wild boar to the Norse god Freyr during harvest festivals, many New Zealanders insist on having a ham on the table. Pigs generally have a pretty tough life when farmed for their meat in New Zealand and elsewhere. The ones used for meat are killed at four to seven months of age, having lived their entire lives in filthy metal pens. On many farms the mother pigs are kept in pens only 60cm wide and 2m long while they try and give birth and tend their babies.

So no Christmas joy for the piglet then, who far from being the wild boar of pagan rituals, is a young pig not even a year old. Rudolph might fly in freedom across the night skies but not so the pigs who ‘grace’ our Christmas tables with their dead bodies. A tortured body who never experienced the freedom that was his birthright.

And so we come full circle back to animal rights. At Christmas we live in a fantasy world of ritual and snowy scenes, preaching love, goodwill and cheer. Barely do we pause to consider the lives of the animals who make our Christmas meaningful. We believe in the equally fantastical world of high animal welfare and happy animals. We don’t pause for breath long enough to take the blinders off.

Or maybe Rudolph’s nose light is just so bright it blinds us.

I think many will agree with me that animals don’t deserve the misery we inflict on them in the name of our food. It’s difficult though, to unknow what you know once you realise how animals suffer in industrialised agriculture. Like finding out Santa is not real, we still keep the fantasy alive through parades and false snow.

We still imagine our Christmas ham was happy.

Pavlovas are a New Zealand Christmas favourite. It is made by eggs laid by 3 million egg-laying chickens in New Zealand who live for about 18 months in a small metal cage before being killed. They are shackled upside down on a giant conveyer belt and take their turn being stunned by an electrical current and their throats slit. Not very nice if you ask me, but then neither is the giant macerator that minces up male chicks at one day old.

The bullying Rudolph received is tame in comparison.

And what about the 1.8 million newborn calves who died this year for dairy products like cream to go with the strawberries and get stuffed in the ginger snaps? The mother cows are still traipsing twice a day to the milkshed to relieve their udders of the milk they produced for their absent offspring.

So pause for a moment and overlook the imagined drama of hundreds of vegans gatecrashing a Santa parade. It didn’t happen like that and neither did a factory farmed pig have the time of his life rolling in mud before he ended up on your plate with the glaze. The people marching were speaking up for animals rights – as simple as that.

This Christmas spread some joy and compassion. Consider having a meat-free Christmas and leave the eggs and dairy at the supermarket. There are plenty of other foods like this collection of Christmas recipes by Jamie Oliver.

As for the children, like Rudolph they are more capable then you give them credit for. Just stop lying to them. Teach them to make compassionate choices. Help them to build a better world. The future after all, belongs to them. 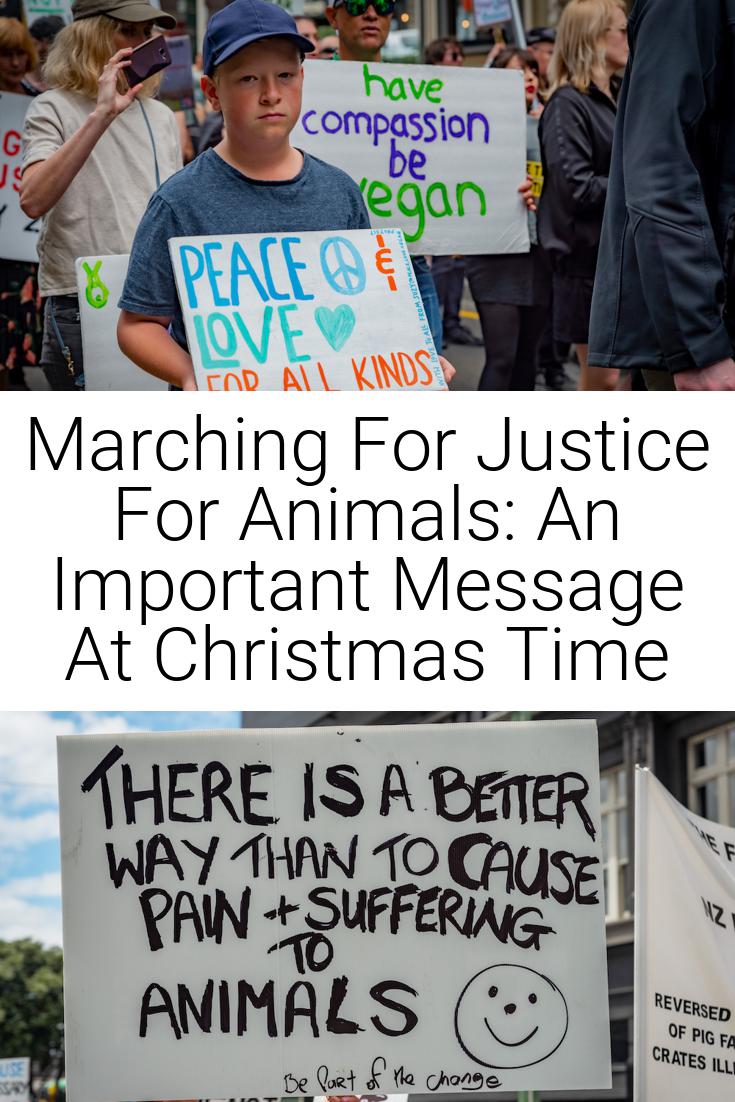