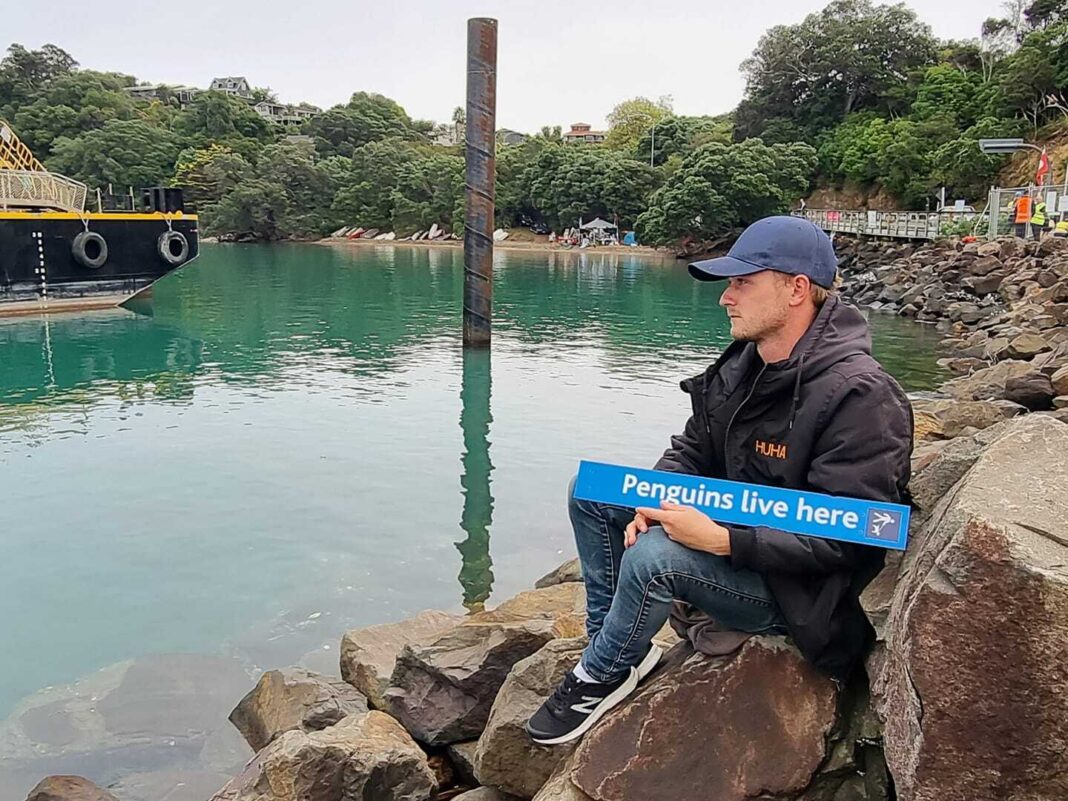 Last year was a mammoth one for animal rescue ream HUHA, rescuing and rehabilitating kangaroos and other injured wildlife who lost their homes in Australian bush fires before heading home to NZ to begin the massive task of finding safe and loving forever homes for almost 200 cows and calves who had been saved from the dairy and veal industry.  This year so far looks to be shaping up to be the year of the penguin for founder Carolyn Press-McKenzie and her tireless team.

The Little Blue Penguin is the world’s smallest penguin and native to New Zealand.  Listed as ‘at-risk’ and ‘in-decline’ it is a protected species under the Wildlife Act.  Locals and visitors to Kennedy Point Bay, on Auckland’s Waiheke Island have delighted in these special penguins making the bay its habitat and home.  That is, until marina developer Kennedy Point Boat Harbour Limited (KPBL) decided it was the perfect location to construct an 186-berth marina and floating car park.  The proposed construction is the size of approximately NINE full-size international football stadiums and naturally puts the already declining penguin colony even further at risk.

For the past four years, Waiheke Island-based environmental group Save Kennedy Point (SKP), along with many of the local community have challenged the resource consent for the Kennedy Point marina in various courts. With KPBL recently threatening to commence construction work however, concerns for the welfare of the Little Blue Penguin and their burrows and nests quickly grew.  Karen Saunders of Native Bird Rescue – Waiheke Island was shocked when she was called by representatives of the developer to go to the site and remove approximately 34 penguins, just a few days before construction was due to begin.  ‘It really showed me that the developer had no proper plan to manage or protect penguins at the site’, she said. HUHA can always be counted on to step into action at a moment’s notice and were soon on their way to Kennedy Point Bay to add their voices in opposition to the build, alongside other local and environmental representatives.

With the barge scheduled to commence the destruction the very next day and already floating nearby, they stood together with members of local Māori iwi (tribe), Ngāti Pāoa in protest.  ‘We are getting a sense of huge community objection to the marina development in general, we are proud as guests to stand with them. Our task to help this community, is to help the penguins and assure their safety. The destruction of the penguins burrows can not go ahead tomorrow as the developers have no effective plan …there is no sense to their casual disregard’, reports came from the HUHA Facebook page.  A trespass notice was delivered to the marine developers by representatives of Protect Kennedy Point and as the tug boat carrying construction workers sailed away, the battle to save the penguins had been won – at least, for that day.

The fight to save them permanently however is still not over.  An intense three-hour meeting was held on April 14th with the developers, Auckland Council and the Department of Conservation, to give them the opportunity to explain their plan to mitigate distress and suffering caused to the penguins.  Sadly, no agreement was reached.  ‘We heard two of the most qualified penguin experts agree that the developer’s current plan approved by Council and DOC is unsatisfactory’, HUHA told its followers in frustration following the meeting. ‘Their experience in the past has been that even with the best planning and care by experts, penguins have been crushed and killed in similar projects. Yet there is no plan and serious risks are posed.  Despite this, the developer has refused to give an undertaking of 24 hours notice for when they are going to reconvene works which leaves us feeling very concerned for the wellbeing of the penguins’.

No choice but to act

On Monday 19th April, Save Kennedy Point filed an application for an injunction and judicial review against marina developer Kennedy Point Boat Harbour Limited (KPBL), Auckland Council and the Department of Conservation (DOC) at the High Court in Auckland, along with HUHA, World Animal Protection, Earth Race and the Ngāti Paoa Trust Board.

SKP Chief Executive Sebastian Cassie said, ‘The developer was about to commence construction – despite the marina resource consent currently being under appeal before the Supreme Court, New Zealand’s highest court; and without having a proper penguin monitoring and protection plan or authorisation(s) under the Wildlife Act in place to ensure the protection of this native at-risk species. Because of this, we had no choice but to bring on urgent proceedings to protect the penguins, who call Kennedy Point Bay home. We expect that many more may still join because this isn’t just an issue that affects Waiheke Island, it is something that will affect the whole of New Zealand. Protecting our native species must come before any commercial development or interests’.  Forest and Bird has also since come forward in support of the judicial review.

‘Just stop, and do what is right’

‘I hope the case that has been filed encourages the developer to stop what they are doing and to listen to the experts, engage with community and do what is best for the penguins. Right now, that means stopping all construction works. As the person who goes to Kennedy Point to rescue penguins, the thought of construction works commencing without a proper plan in place and putting these penguins at risk is shameful and unthinkable. Just stop, and do what is right – that is my message to the developer, if they care’, urges Karen Saunders.

‘There is a significant colony of Little Blue Penguin at Kennedy Point Bay and it is clear that the proposed marina construction work will not only disturb and affect the penguin but also their habitat’ says Carolyn Press-McKenzie.  ‘As such, no marina construction work should commence until there is a proper plan in place to protect the penguins and their habitat. The developer should not be permitted to do any works that might impact the penguin until it has proper authorisation(s) under the Wildlife Act. This has been the advice of all of the experts. HUHA and World Animal Protection have joined this action to ensure this advice is followed for the protection of the penguin and their habitat’.

The injunction and judicial review applications are now expected to be listed for urgent hearing before the High Court.

SUPPORT THE WORK OF HUHA (HELPING YOU HELP ANIMALS)

For more information on how you can help HUHA from wherever you are in the world, visit their website https://huha.org.nz/get-involved/donate/ 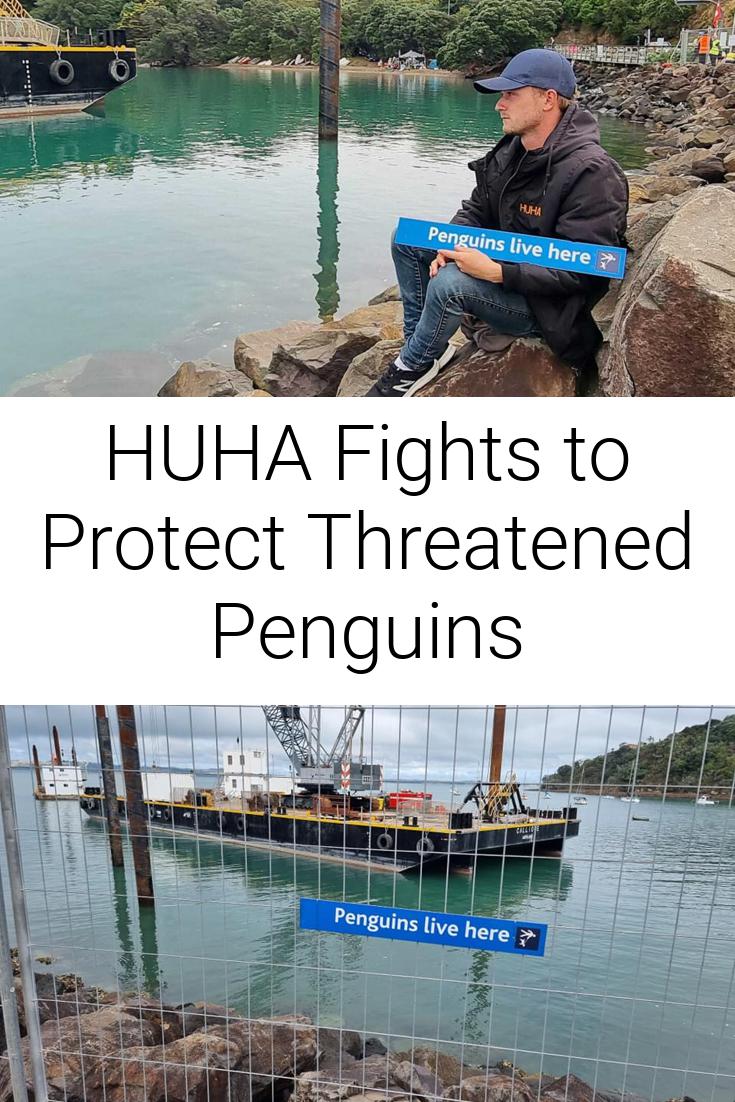 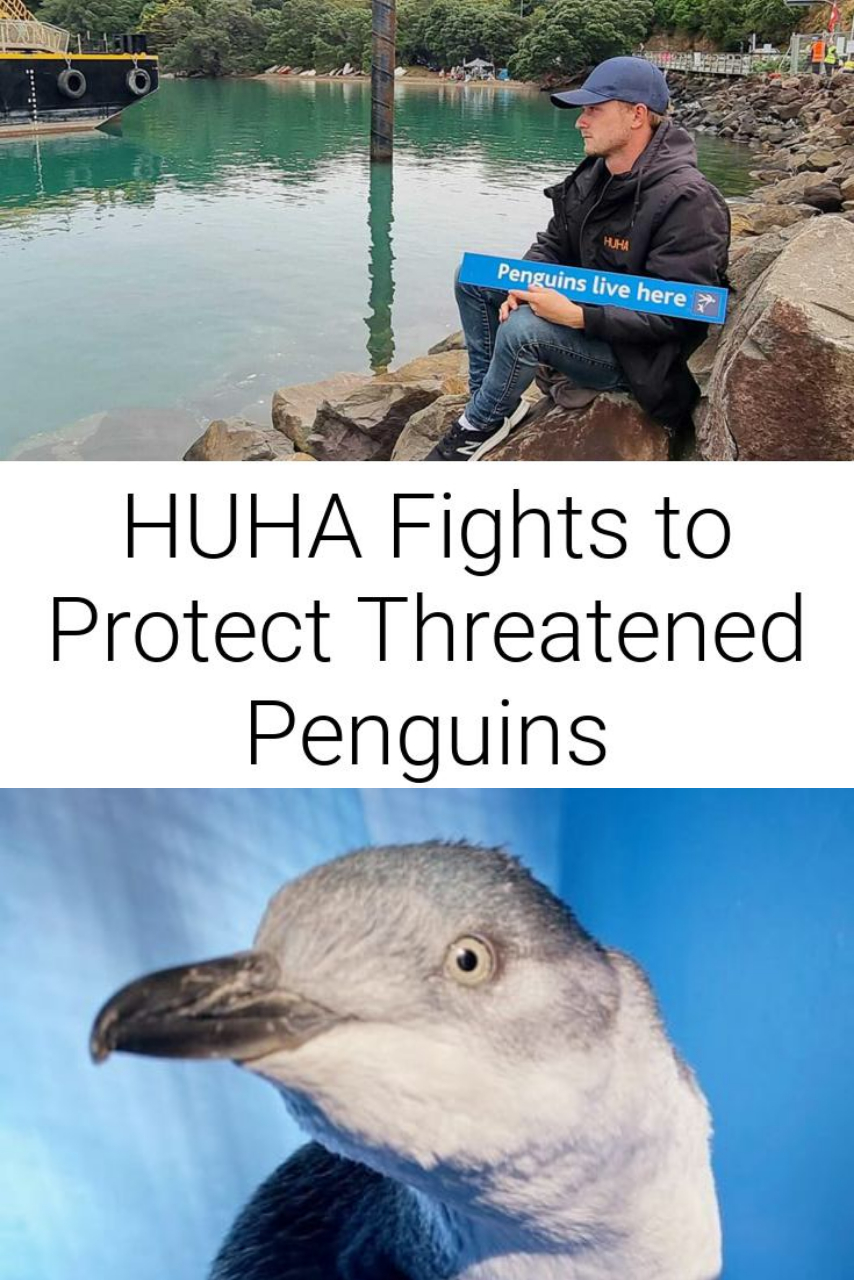