The tiny mouse is lowered into a beaker filled with water. Terrified, she paddles furiously to keep herself afloat. Her delicate paws slip against the glass as she struggles to escape, but there is no way out.

She begins to float helplessly on the surface to conserve her energy.

To her, the fear of drowning is real.

This is the reality for mice used in the Forced Swim Test, a cruel and invalid animal test that is still permitted in New Zealand.

What is it used for? It’s used in research relating to depression – yes you read that right. It’s used as a ‘tool’ to try and find useable antidepressants for humans.

Some researchers believe that the molecular underpinnings of an animals’ behaviour when faced with the fear of drowning is somehow precisely correlated with despair, coping or therapeutic action in humans with depressive disorders.

But this has been shown not to be accurate. Humans and mice don’t even regulate important neurotransmitters in the same way! Specifically, proteins that affect neurotransmitters like serotonin are not produced by the same cells in mice and humans. This means that the brain cells that communicate with each other—and the brain cells that respond to drugs meant to treat depression, anxiety, and bipolar disorder—are drastically different between mice and humans.

A preview of what the Forced Swim Test looks like:

Just this month, the UK Medicines and Healthcare products Regulatory Agency, which regulates and approves all drugs and medical devices in the UK, and the Animals in Science Regulation Unit which regulates all animal experimentation, collaborated on a study on the Forced Swim Test.  Their conclusion? The Forced Swim Test does not model human depression and it is is not a reliable screen for potential antidepressants – they also noted that it could even rule out effective new drugs for humans, and they recommend against its use.

‘The public attention and scrutiny of this test isn’t going to stop – our petition asking the NZ Government to ban the Forced Swim Test was over 25,000 signatures strong so we know that a lot of people out there are just as passionately against this test as we are!’ wrote New Zealand Anti-Vivisection Society Executive Director, Tara Jackson this week.  ‘We have been busy, working hard behind the scenes to push for change and  recently attended the annual conference of the Australian and New Zealand Council for the Care of Animals in Research and Teaching (ANZCCART) to talk to animal-based researchers directly about the need for action against this test’.

‘Given how important mental health is and how serious of a condition depression is, this isn’t good enough.  With depression being the world’s predominant mental health problem, we shouldn’t tolerate one more minute or one more dollar being spent on research methods that simply aren’t working.  We need to make sure NZ keeps up with this international progress’.

To learn more about NZAVS, and support them in their campaign to put an end to the Forced Swim Test, and other barbaric and unnecessary tests on animals, visit https://nzavs.org.nz/ 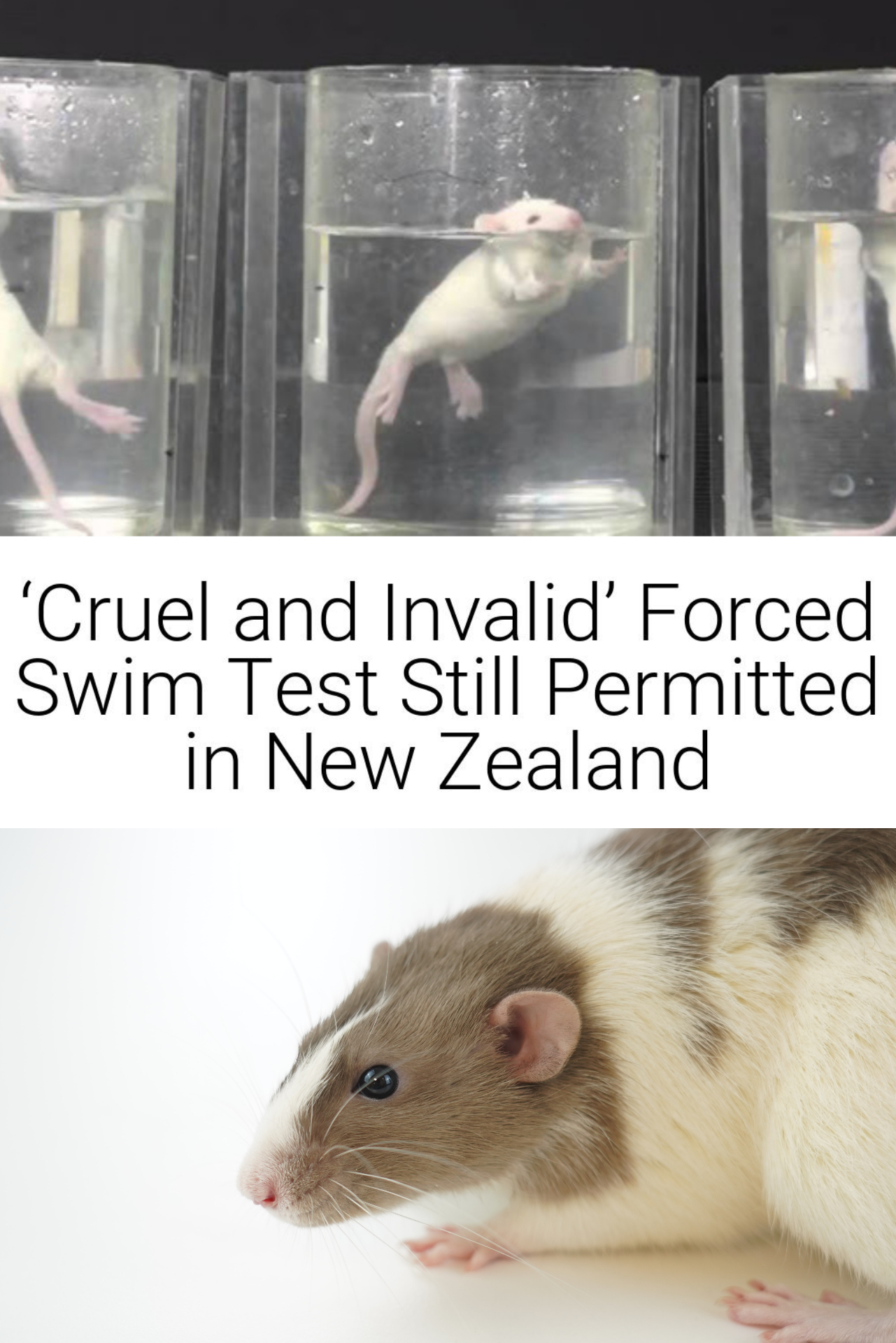