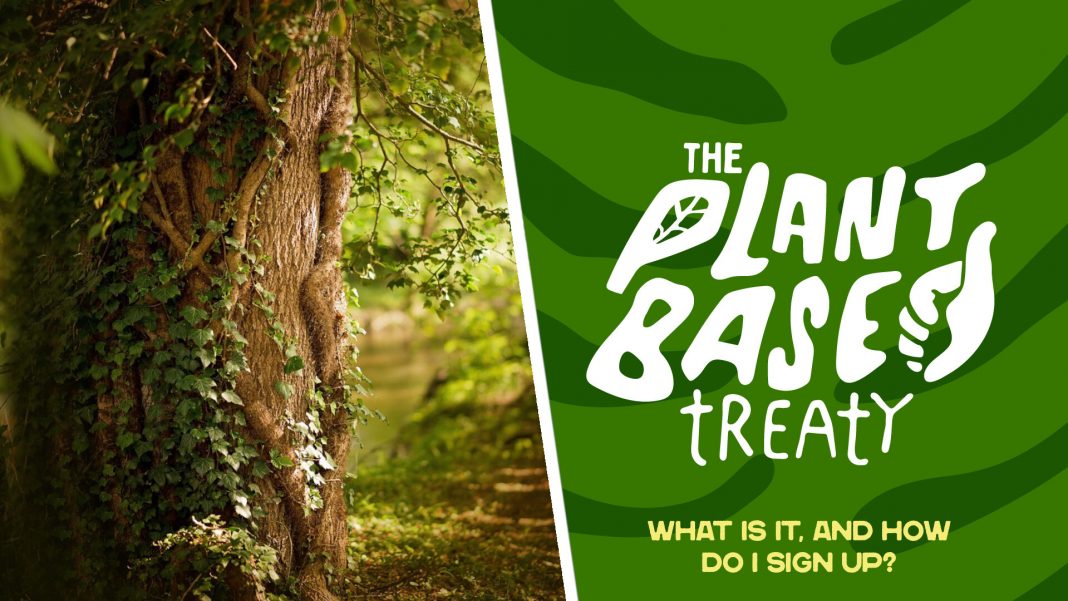 Activists around the world are calling on governments to put food systems at the forefront of tackling the climate crisis, following the launch of Animal Save’s groundbreaking new grassroots campaign, the Plant Based Treaty.

Modelled on the popular Fossil Fuel Treaty, the Plant Based Treaty aims to halt the widespread degradation of critical ecosystems caused by animal agriculture and to promote a shift to healthier, sustainable plant-based diets and to actively reverse damage done to planetary functions, ecosystem services and biodiversity. They are urging scientists, individuals, groups, businesses and cities to endorse this call to action and put pressure on national governments to negotiate an international Plant Based Treaty.

The Plant Based Treaty has three core principles:

Why the Plant Based Treaty is important

The world’s population is expected to increase by 2 billion persons in the next 30 years, from 7.7 billion currently to 9.7 billion in 2050.  Considering people’s current eating trends, this is completely unsustainable.  Fossil fuels and animal agriculture are the driving force behind runaway global warming as well as extensive biodiversity loss, large-scale deforestation, species extinction, water depletion, soil degradation and ocean dead zones.

‘Addressing fossil fuels alone is not enough’, the campaign website explains.  ‘We need action on food systems too; that’s where the Plant Based Treaty comes in. The three main greenhouse gases — carbon dioxide, methane and nitrous oxide are at record levels and rapidly accelerating; animal agriculture contributes to all three but is the main driver of methane and nitrous oxide emissions globally.  Scientists warned in the IPCC sixth assessment that we need to cut methane or face collapse. These three greenhouse gases must be tackled both urgently and with equal measure. Plant-based and soft energy solutions that can mitigate this disaster are within our grasp — we just need to implement them’.

Global leaders urged to sign the Plant Based Treaty

Actions have already taken place outside nearly 100 town and city halls worldwide including Manchester, Bristol, Amsterdam, Lisbon, Rome, Los Angeles, Mexico City, Toronto, Seoul, Mumbai and Ankara to encourage leaders to sign the Treaty. Leveraging this grassroots support, the campaign will work towards 10 million individuals, 10,000 organisations, 10,000 businesses and 50 cities to endorse the treaty by 2023, ahead of the Global Stocktake of the Paris Agreement (GST).

Celebrities, physicians and politicians have also been quick to add their names in support of the treaty, including Moby, T.Colin Campbell and the Hon. Emma Hurst.  The list of supporters, organisations and charities endorsing the treaty continues to swell, as well as over 5,000 endorsements from individuals to date.

Vegan FTA proudly endorses the Plant Based Treaty.  You can too!

Becoming an endorser couldn’t be easier.  All it takes is a few moments to fill out the online form.  You can register as an individual, an organisation, a business and even your city.

Eat plants, plant trees, and endorse the Plant Based Treaty!

Need some help transitioning to a vegan diet?  The Plant Based Treaty website can help with resources here.