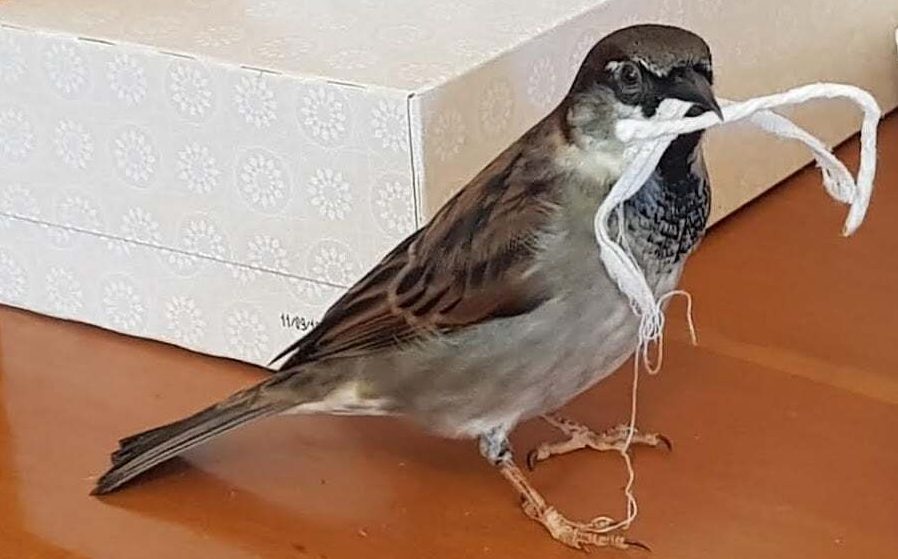 Flappy the sparrow came into my friend Lonia’s life on Valentine’s Day, 2009.  He was brought to her by someone after he fell out of a tree and was only around three weeks old. Lonia, who had experience looking after birds, hand-fed him for a while, then he began to feed himself on the soaked cat crunchies, canary seeds, fruit veggies and cooked wholegrain rice she prepared for him daily.

The plan was to release him when he was able to fly well and fend for himself. Lonia started flight training him, being careful not to imprint him too much prior to release. After some training he could fly a little, but wasn’t gaining height. Lonia couldn’t release him until he was a strong flier, but then something started to happen. Lonia realised she was falling in love with the spirited little guy.

Part of the family

For Lonia there was something extra special about this little sparrow right from the start. He had so much personality. She decided they belonged together, and once her partner Steve OK’d it, he was named Flappy and became a part of the family.

Flappy was a very spoilt little sparrow. He had two homes – a day cage and a night cage, both hung from the ceiling in the lounge, and was free to fly around a lot of the time. Lonia guarded Flappy closely; there were cats to manage, and the safety of her little darling was paramount.

Every morning Lonia spent an hour or so playing with Flappy. He would pull her hair, nibble her toenails, climb through her dressing gown sleeve and pop out through the top by her throat. Or he would snuggle up close to her inside the dressing gown. Sometimes he would do gross things like pick her nose, and when she told him he needed to improve his manners his usual response was to give her a swift peck, or put his head in her mouth while she was speaking.

Sparrows love to play – with everything!

As well as the formal playtimes, Flappy would express his sparrow-ness by hanging out on the windowsill and yelling abuse at the outside birds. He liked to explore the bookshelves, and had his own personal little cubby hole – a small box positioned in the corner of one of the shelves, where he enjoyed spending time. At night he used to sleep either on top of or inside a similar box in his cage.

When Flappy managed to activate Lonia’s cell phone too many times she issued him with his own (old) one. He loved tapping at his phone, and another thing he loved to do was to strut around with pieces of string hanging from his mouth. He also enjoyed pulling tissues out of the box, and taking them back to his cage.

When Flappy had finished his morning games he would fly back to his cage and prepare himself for the afternoon’s concert. Flappy had lots of toys, but his favourites were the drums and bells. Drumstick in his mouth, he would bash away for ages. Lonia and Steve also had Jimmy, a canary who was a wonderful singer, and cunning Flappy, knowing he couldn’t compete with such a tuneful voice, devised a strategy of deflecting attention away from the songster by bashing at the drums, ringing his bells and chirping tunelessly at full volume. This became a regular matinee, so Lonia decided to give her band a name, ‘The Avians’, with Jimmy on vocals and Flappy on everything else.

Bathtime was definitely a favourite with Flappy. He would hop in for a splash, then fly onto Lonia’s shoulder to shake off the excess water. This would be followed by another splash, and back to the shoulder for another shake. After a bath, or just about any time he felt like it, Flappy would snuggle into Lonia’s throat for a nap, and as soon as he sensed night was falling, he knew what to do. Lonia would say ‘Night night, time to go home now” and Flappy would fly straight inside his cage and tuck up for the night.

And so the years went by.  Although undoubtedly a shameless attention-seeker, a blatant show-off, at times a curmudgeon, if he became frightened for any reason Flappy would fly to Lonia and she could feel him pressing close against her. Flappy was also very choosy about who was allowed to come into his territory. On rare occasions he would graciously accept a visitor, but sadly that wasn’t true for me. When I visited Lonia the first time Flappy refused to come to me, and sat in his cage with a sulky look on his face. How dare she come here! Who does she think she is? How many times have I told Mummy that she’s NOT to bring strangers in here without asking me first!

Lonia and Steve knew when Flappy was in a grumpy mood from the tone of his chattering sound; it was like a disgruntled person muttering to themself. But although Flappy definitely had an attitude, most of the time he was extremely loving and affectionate. He was also bright. For example, he saw through any new strategy Lonia devised to coax him into his cage, and showed a definite preference for certain television shows. Watching rugby with Steve was a favourite, and he was an enthusiastic and vocal supporter for whichever team was playing.

Over the years they were together a deep, and trusting bond developed between this common little house sparrow and the loving mother who had rescued him as a baby. Such was the bond between them that Flappy could sense Lonia’s presence, even when she was in another room.

12 years of love and companionship

Flappy remained in perfect health throughout his long life, and the morning of 19 July 2021 was typical, with no indication that anything was wrong. Later in the day however, Lonia noticed that he appeared to be unsteady. He tumbled off the perch and kept trying unsuccessfully to stand, his head was turned inwards to one side. He wasn’t blinking and had a fixed, glassy look to his eyes. A veterinary appointment was not available until late afternoon so Lonia took Flappy out of his home, and he spent most of the day snuggled calmly against her. The vet confirmed that Flappy had had a stroke, but said that birds will often recover within a few days without intervention. The signs seemed quite favourable for Flappy, so overjoyed, Lonia brought her boy home again. He appeared to be back to his old self.

Then almost a month later, on 16 August, Flappy appeared to have had another stroke, although less severe than the previous one. This time Lonia and Stephen drove him to a specialist avian vet at Massey University in Palmerston North. Extensive tests showed that Flappy’s kidneys were failing. Lonia and Steve declined any more invasive tests or procedures as Flappy was already quite old for a sparrow, and given his state of health it was too risky. They knew that Flappy would not be with them for much longer, but decided to focus on one day at a time.

Flappy rallied for a while, but on Monday 30 August something changed. He ate very little and was subdued, and just wanted to snuggle into Lonia’s throat. They spent the whole day like that. Lonia could see that her boy was beginning to deteriorate, and kept his cage home right next to her that night.

Next morning Lonia found him in a shocking state, convulsing on the floor of his home. She pressed him next to her heart, while the convulsions settled then started up again. On his last journey to the vet clinic, she held him close.

Due to Level 4 Covid lockdown restrictions, Lonia was not allowed to enter the clinic, and was instructed to leave Flappy at the door and wait outside. She stood holding him until the nurse indicated that she was ready for him. She put her Flappy into a small box and placed it on the outside table. Her final memory is of his little body convulsing in the box as he was taken indoors.

Flappy passed away on Tuesday 31 August 2021, at age 12 years and 7 months.  When I heard about his passing two days later, I visited Lonia with a card and plant to put in Flappy’s memorial garden. Lonia was still bereft, her eyes welling with tears above her mask, her chest heaving as she tried not to sob. It was all the harder for her as she had wanted to be with him at the end, and was prevented by lockdown. I was very moved to see the level of Lonia’s grief. I have had a close relationship with my birds, but I have never witnessed such a tender love between a woman and a bird as the one I witnessed between Lonia and Flappy.

So next time you see a common little sparrow in your back yard, foraging in the soil, sitting in a tree or power line, chirping away during a dawn chorus – please know that he or she is an individual, who values their life, and is capable of thinking and deep feeling. 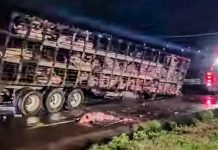 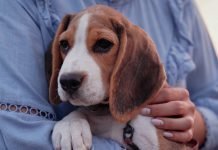 Meghan Markle Has Adopted a Rescued Beagle from Vivisection