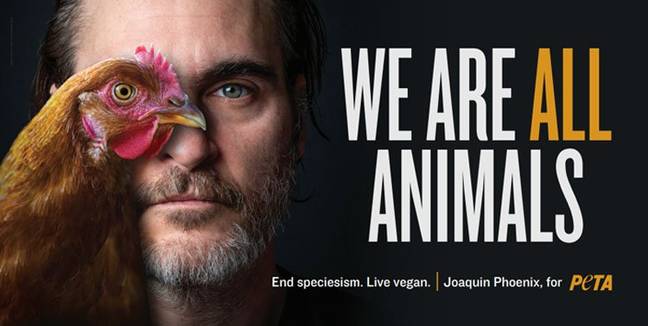 The American Oscar-winning actor Joaquin Phoenix has been calling for an end of speciesism, adding his voice to the PETA’s campaign ‘We Are All Animals’ that has been running since 2019.

Speciesism is the systematic discrimination of individuals because of the species they belong to, as racism is the equivalent for races. The British author, psychologist, and animal rights advocate Richard Ryder — considered one of the founding fathers of the modern animal rights movement — first coined the term in the 1970s. He defined it as “a prejudice or attitude of bias in favour of the interests of members of one’s own species and against those of members of other species.”

Together with avoiding all harm to all sentient beings, believing that all animal exploitation causes harm, and considering that all animals are sentient, being anti-speciesist is one of the major tenets of the philosophy of veganism. Therefore, calling for an end of speciesism is what you would expect committed vegans like Joaquin Phoenix would do. His call is, in essence, for everyone to go vegan.

“When we look at the world through another animal’s eyes, we see that inside we’re all the same—and that we all deserve to live free from suffering,” said Phoenix when the campaign was launched. The actor and activist decided to go vegan at the age of three after he and his siblings “witnessed fish being killed in a really violent and aggressive way“. Since then, he has often used his public exposure to send the message of veganism to a wider audience. For instance, during his 2020 Oscars ceremony acceptance speech for the best actor award for his performance in the film ‘Joker’,  he talked about the suffering of animals in the animal agriculture industry. This is why he is considered one of the heroes of the vegan movement.  He famously narrated the 2005 documentary Earthlings, which has been the trigger of many people becoming vegan.