According to some veterinary experts, vegan diets are just as healthy for cats and dogs as meat-based diets. Veterinary professor Andrew Knight from the University of Winchester (himself a vegan for many years) has been studying the effects of diet on dogs and cats. He says that providing vegan pet food is carefully formulated with additional synthetic nutrients, his research showed that cats and dogs had as good, or even better, health outcomes on plant-based diets as they did when fed on traditional pet food.

He told to The Guardian: “Dogs, cats and other species have requirements for nutrients, they don’t need meat or any other particular ingredient. They need the set of nutrients and provided those are supplied to them in a diet that’s sufficiently tasty that they’re motivated to eat it and digestible, we’d expect to see them thrive. And that’s what the evidence seems to indicate.”

Other vets disagree, saying that they would not recommend feeding dogs or cats a vegan diet as it is much easier to get the balance of nutrients wrong. However, several brands of pet food are already plant-based, especially dog food. It’s hard to believe how dogs guardians may get the diet for their companion animals wrong if the only thing they have to do is to buy already manufactured good quality vegan dog food with the appropriate ingredients in it.

“The claim animals on vegan diets will necessarily become ill and it’s somehow cruel to maintain them, is contrary to the scientific evidence in this field and is ignorant,” said Prof Knight.

Cats are more problematic as are carnivores rather than omnivorous like dogs, and they especially need taurine in their diet. However, Prof. Knight said that this amino acid is typically degraded in highly processed pet food and needed to be added back to the food synthetically (as nutritionally balanced cat plant-based food already has).

Vegan pet food is not just as healthy, but the animals like it too. Prof. Knight has recently published a study of over 4,000 dogs and cats that showed that they were as happy eating vegan pet food as traditional meat-based pet food. Vegan pet food is better for the environment too. A 2017 UCLA study found that pet food generates about 25% of the environmental damage associated with the meat industry, equivalent to 64m tons of carbon dioxide a year. 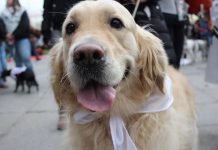