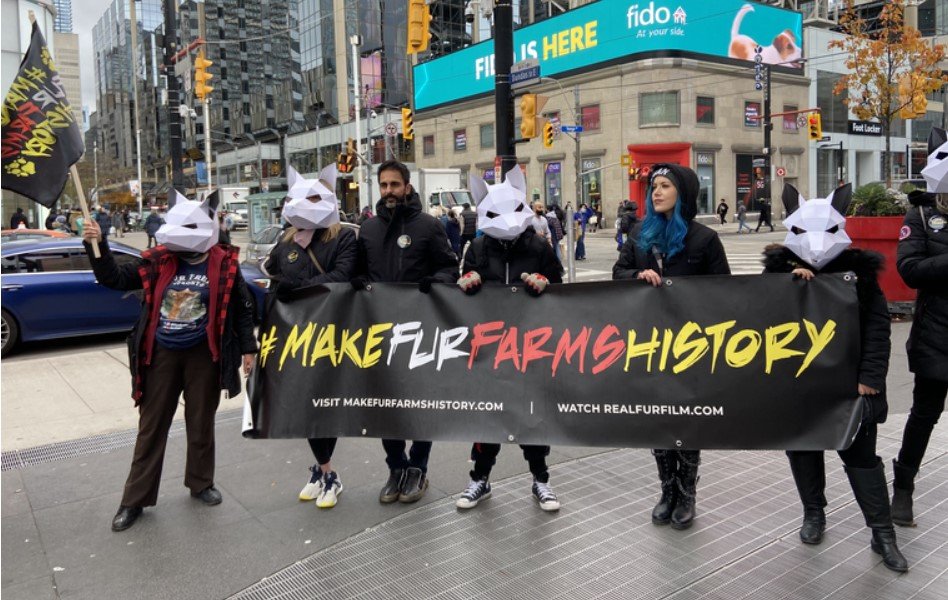 On Fur Free Friday (November 26, 2021) many activists took to the streets in demonstrations over 12 cities around the world to #MakeFurFarmsHistory.

There are still many countries that have fur farms. In Canada, every year, four million animals are killed and stripped of their skin for the fur industry. Not only that, but they spent their lives in terrible conditions in fur factory farms, as a recent exposé of Finnish fox farms showed, or the new film Real Fur, an investigative educational documentary about the true cost of fur in the fashion industry.

Foxes and minks are typically electrocuted or gassed to death with minimal regulatory oversight. Fur farms also wreak havoc on local ecosystems by releasing harsh chemicals and animal waste into the soil and waterways. They are also a health hazard for humans, as the crowded conditions, paired with minks’ capacity to be infected by human viruses such as COVID19, mean fur farms are hotbeds of disease.

Canada’s fur farm industry is under-regulated and not much is known about it. According to Statistics Canada, there were 98 fox farms and 27 mink farms in Canada in 2018. Although the numbers have gone down (165 and 33 respectively in 2017, and 194 and 34 in 2016) in 2020 more than one million minks and 2,000 foxes were born and killed in such farms. The natural phasing down of the industry by an international reduction of fur consumption is not going fast enough, and a total ban on farming and trapping animals for fur is needed.

Despite fur farming having been already banned in many countries, and British Columbia announcing the phasing out of mink farming by 2025, since 2014 the Canadian federal government has spent over 100 million in taxpayer dollars subsidizing fur farms. MP Nathaniel Erskine-Smith announced plans to introduce a federal bill banning fur farms. You can now help him and the campaign #makefurfarmhistory by signing a petition/letter addressed to national and provincial officials calling for a ban on fur farming in Canada.