The world’s first commercial octopus farm, where many animals will suffer a horrible life and death, is being built in Spain. The Spanish multinational, Nueva Pescanova (NP) has announced that it will start marketing farmed octopus next summer, to sell their flesh in 2023.

NP’s commercial farm will be based at the port of Las Palmas in the Canary Islands. According to PortSEurope, the company is investing over €50 million in a plant to produce 3,000 tonnes of flesh from killed octopuses per year, equivalent to 10% of the catches of the cephalopod made each year by the Spanish fleet. How they are planning to keep the animals is being kept secret, but many scientists and conservationists are sure they are likely to suffer their captive conditions as octopuses are very intelligent sentient creatures able to feel pain and emotions. And not only octopuses will suffer. As they are carnivores and need to eat two-to-three times their weight in food to live, many other animals are likely to be killed to feed them.

The Cambridge Declaration on Consciousness, signed in 2012 by a prominent international group of cognitive neuroscientists, neuropharmacologists, neurophysiologists, neuroanatomists and computational neuroscientists, stated that cephalopods (octopus, squid, cuttlefish, etc.) are sentient beings. Several countries have already legally recognised them as sentient, and recently the UK government has announced that it will do so when the Animal Welfare (Sentience) Bill will be passed.

Dr Elena Lara, Compassion in World Farming (CIWF)’s research manager, said to the BBC: “These animals are amazing animals. They are solitary and very smart. So to put them in barren tanks with no cognitive stimulation, it’s wrong for them.” Regarding whether farming them is better than catching them in the wild, she said: “It’s not more ethical at all – the animal is going to be suffering its entire life.” And they will be killed in a painful way too. According to CIWF, there is currently no scientifically validated method for the humane slaughter of octopuses.

Kerry McCarthy MP, the vegan Member of Parliament in the UK, has tweeted: “I just don’t get why anyone would want to turn something as amazing as an octopus into a farmed commodity. industrial farming…Would hope we can protect against this U.K. wise in Animal Sentence Bill, now that Govt has conceded on cephalopod (and decapod) sentience, although obviously recognising sentience doesn’t protect against industrial farming.”

If the farm goes ahead in Spain, the unfortunate animals bred and kept there would receive little protection under European law, as although they are considered sentient beings, EU law covering animal welfare for farmed animals is only applied to vertebrates. Factory farming of any animal is an aberration of humanity. We must remember that pigs are also considered to have high human-like intelligence, and yet they are also factory farmed. It makes little sense to complain about this new octopus farm and continue to eat the flesh of factory-farmed vertebrates, as although one involves wild animals and the other domesticated animals, all factory farming causes suffering and is as immoral as unnecessary. 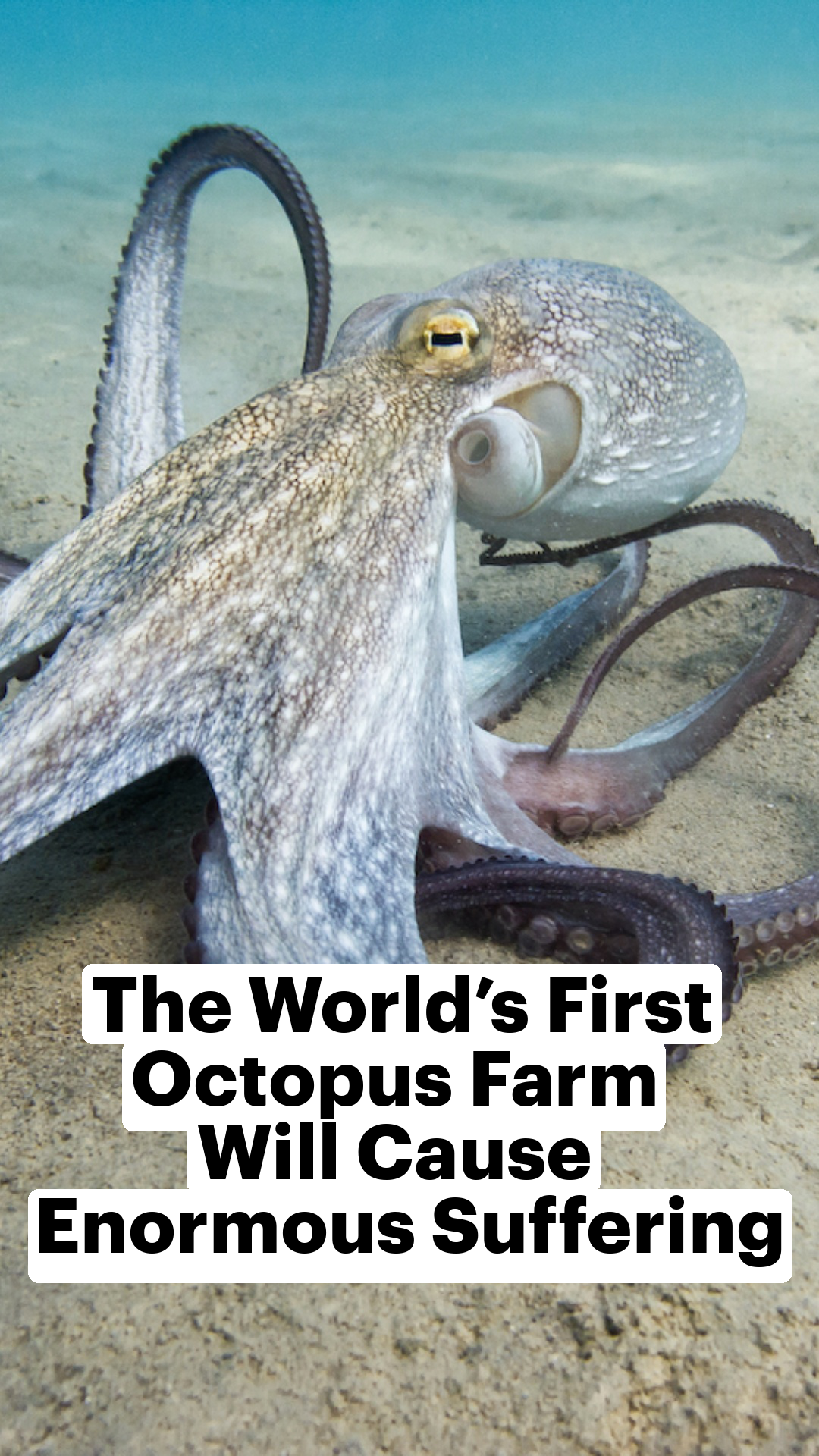