An official of the Woodland Pytchley Hunt has been convicted of assault for striking a hunt saboteur with a riding crop. In October 2019 Mark Marshall Ferguson was on horseback when he assaulted a female member of Peterborough Hunt Sabs during a foxhunt of the Pytchley Hunt in Market Harborough, Leicestershire, England.

Speaking after the case, a Northamptonshire Police spokesperson said: “On the morning of October 19, 2019, Mark Marshall Ferguson, of Skeffington, Leicestershire, was in a field in Clipston Road in Market Harborough, as part of a hunting party. An anti-hunting group were also in the field. There was an altercation between both groups resulting in Ferguson approaching one of the anti-hunting group, a woman in her 50s, from behind on his horse. He pulled her up by the back of her collar before striking her on the head with his riding crop… As a result of the incident, the woman suffered a laceration to her head and bruising to her neck. In the melee, she was also thrown backwards, causing her phone to smash.”

Ferguson, who is registered as the Secretary of the Woodland Pytchley Hunt Limited, was charged with Actual Bodily Harm and Criminal Damage. He pleaded not guilty to both offences but was convicted in Northampton Magistrates Court on 10th March 10 and ordered to pay fines and costs totalling £2,125. There is currently a petition to increase his sentence.

Although foxhunting was banned by the Hunting Act 2004, hunts in England and Wales have continued hunting illegally under the cover of the false alibi of “trail hunting”. On the day of the assault, hunt sabs said they caught them doing so. On Facebook, they posted the following: “North Cambs Hunt Sabs located the Pytchley Hunt (with newly absorbed Woodland Pytchley thugs) near Clipston in Northamptonshire, hunting foxes at Marston Wood, hounds speaking and terriermen roaming around on quads. One team took the east side of the woods, one team took the west side and sabs set off to pick up the hunt. Almost immediately riders started the assaults. With hounds in cry on the scent of a fox, sabs moved in quickly. Hunt riders took great offence to this and one of our crew was hauled by the hood of her jacket, lifting her off her feet and choking her. After she was released from this grip, hunt rider Mark Ferguson brutally struck her over the head with the handle of his riding crop sending her crumpled to the ground.” 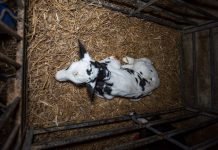 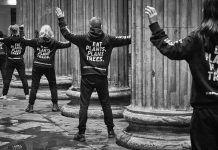