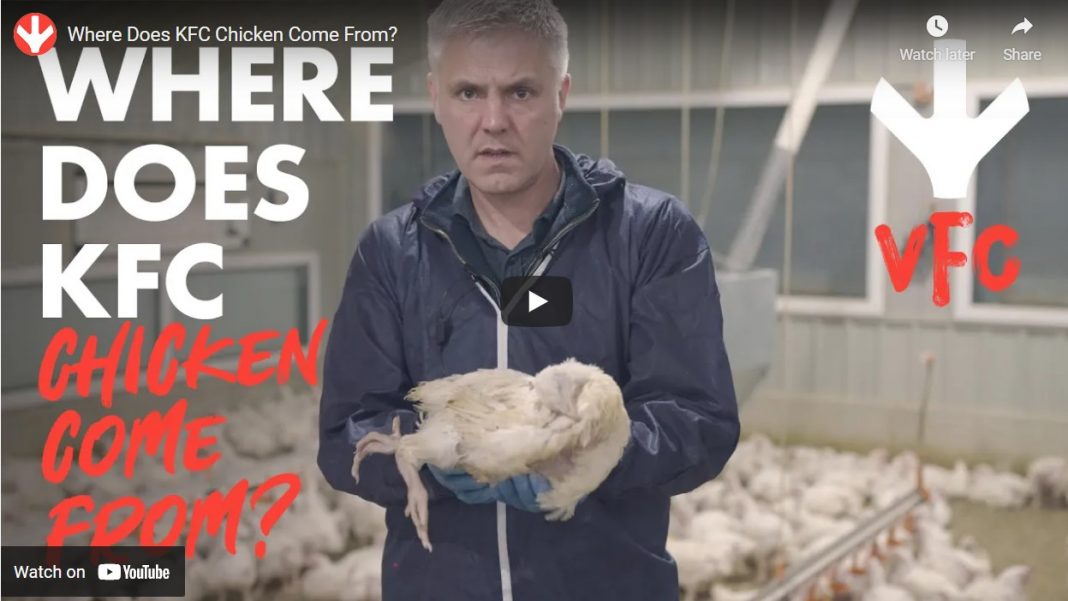 When KFC launched a paid promotion to showcase the high welfare standards on its farms, it did not expect the vegan fried chick*n brand VFC to track down the very same farm. Yet, just weeks after the paid partnership with Joe.co.uk, where YouTuber Niko Omilana was shown around a flagship farm in Lincolnshire, VFC visited unannounced to compare the claims made in the KFC promotional film with the reality. KFC’s light-hearted film, which was seen 1.5 million times, showed:

* Fresh straw covering the floor of the entire shed, and the farm manager asked Niko to spread still more

* Platform perches were provided as enrichment to enable natural behaviours

* The birds were young and had a reasonable amount of space

* There were no dead, sick or injured birds anywhere

When VFC’s co-founder Matthew Glover visited the farm, conditions for the animals could not have been more different. The VFC film, which has been seen 5.4 million times, a figure which continues to rise by tens of thousands every day, showed:

* There was no straw on the ground, which was sodden with animal faeces. Two plastic-wrapped bales were left by the door

* The perches were raised too high even for a person to reach, and were unavailable to the birds

* There was one small swing for 52,000 birds, which would have allowed each bird one second of use during their lives

* The birds were older, which meant the shed was packed

* Dead birds littered the floor, and two bodies were left abandoned in a wheelbarrow inside the shed

* There were many sick, injured and / or lame birds

Says Glover: “If you’re going to make bold claims about how animals fare inside the intensive farming system, you can be sure we are going to fact-check them. The birds inside this farm were suffering, just as birds inside every other intensive farm are suffering. There was no enrichment for them. There was no room for them to roam, and nothing to make their lives worthwhile. Attempting to greenwash the public was always going to be a spectacular marketing misfire, and here we are, with millions more people knowing the truth about how birds are farmed for KFC.”

Niko Omilana has since taken down the film from his own social media channels.