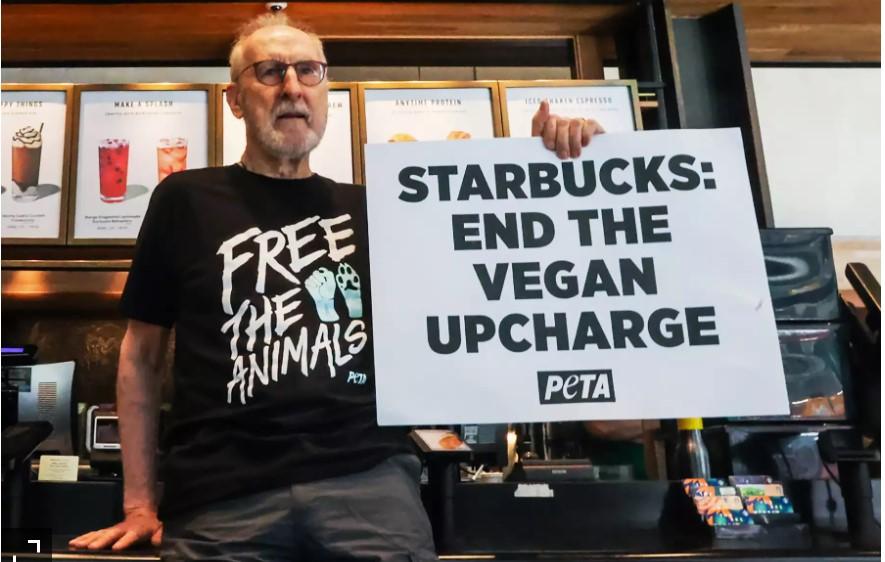 American actor and animal rights activist James Cromwell superglued his hand to a Starbucks counter in New York City to protest against the surcharge the company charges for vegan milk in the US (while in the UK it no longer charges more). The protest was organised by the animal rights organisation PETA on 10th May 2022.

The 82-year-old actor (known for his roles in Succession, Babe: Pig in the City, and LA Confidential) read a statement while glued on the counter of a Manhattan store of this international coffee chain, which included the following: “More than 13,000 customers have asked you, now we’re asking you. Will you stop charging more for vegan milk? “When will you stop raking in huge profits while customers, animals and the environment suffer? When will you stop penalising people for their ethnicities, their morals?… Why, when it’s so important now, to address climate change, and to understand the violence to the animals that go on to make dairy products… and there’s no reason for it except greed.” After the statement was read Cromwell remove himself and no arrests were made.

The reference to penalising ethnicities is a reflection of the campaign which managed to stop the vegan surcharge in all the UK Starbucks coffee shops. Starbucks had announced that from 5th January 2022, it would no longer charge extra for any of its dairy alternatives offered in its UK stores after a few weeks earlier they denied this change in a response to a spoof campaign run by Switch4Good, in which a pretend organisation called Starbucks Cares stated that the coffee shop had decided to drop the extra charge. In this campaign, the organization claimed Starbucks was ditching the upcharge due to the prevalence of lactose intolerance among Black, Indigenous, and People of Colour (BIPOC) communities. It used the argument that 95% of Asians, up to 80% of Black and Latinx people, and more than 80% of Indigenous Americans cannot digest dairy. Therefore, making them pay extra for a dairy alternative is an act of racial injustice. It is believed that this could have been the first documented case where adding an intersectional approach accelerate achieving a vegan campaign goal.