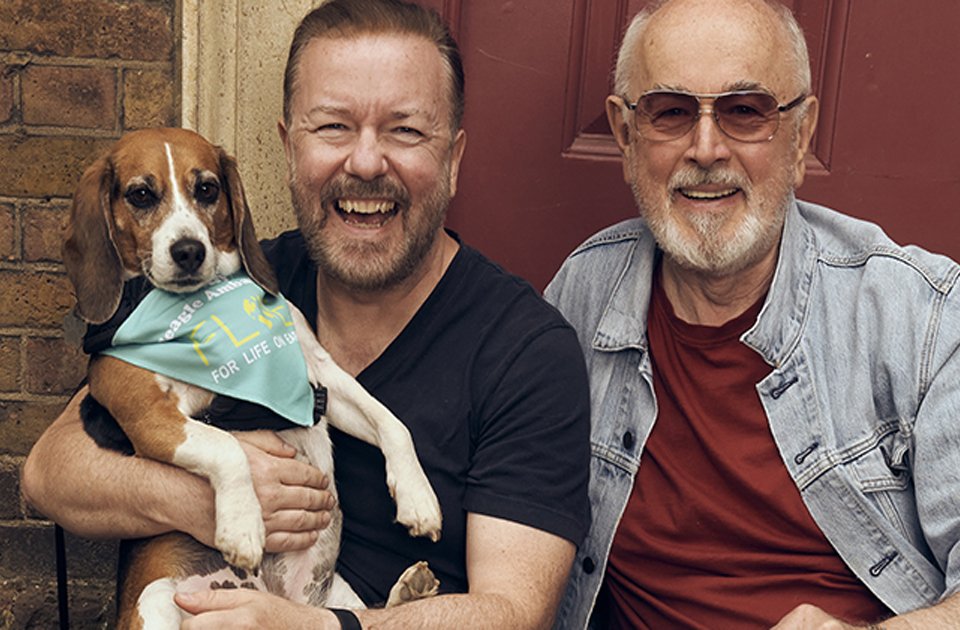 The writer, director, and comedian Ricky Gervais and his After Life co-star Peter Egan are continuing to tirelessly campaign to end experiments on dogs and other animals in the UK, but now with the help of Betsy the Beagle, who was rescued by the Dog’s Trust from a laboratory dog breeder. Betsy has joined the science-based campaign For Life On Earth (FLOE) as Beagle Ambassador.

Dogs like Betsy are intensively bred in the UK for experiments that are permitted by the Animal Welfare Act 2006, which exempts from protection laboratory animals. Experiments on puppies, and other animals, are now widely reported to be entirely failing in the search for human treatments and cures. The latest UK Home Office statistics show that 67% of those experiments involved the force-feeding of chemicals directly into dogs’ stomachs, with no pain relief or anaesthetic.

Ricky Gervais said, “meeting Betsy was beautiful; she’s a tender gentle dog who is now enjoying a happy life in her loving forever home. It’s terrible to think that Betsy started life in the brutal environment of a laboratory breeder, where dogs are crammed into small cells with no outside walks, forced to endure repetitive pacing back and forth, unable to escape the stench of uncleaned floors and the despair which fills their minds.”

Peter Egan said, “meeting Betsy was wonderful; she endured such a horrific start in life, with no love or human kindness, but like all dogs her unconditional love shines through and shows us how truly beautiful animals are. Betsy was rescued from an overcrowded prison cell at a laboratory dog breeder in Ireland, where she was denied fresh air and walks; only the sound of clanging metal gates and the howls of traumatised fellow dogs met her ears. The total medical failure of animal experiments, in the search for human treatments and cures, is today widely reported, including by the British Medical Journal and the FDA, which says that nine out of ten new medicines fail to pass human trials, because animals cannot predict human responses. I applaud the 110 cross-party MPs who are now calling for a top science hearing to judge claims that animal experiments ‘save human lives.’ The Government is being duped by an outdated financial vested interest in the archaic practice of animal experimentation, and the EDM 278 science hearing will stop that, once — and for all.”

If you are from the UK you can help by simply typing in your postcode at this link to ask your MP to sign the Parliament EDM 278 tabled on 12th July 2022.

👉 Sign the Pledge to Only Support Cruelty-Free & Vegan Products: drove.com/.2zoc