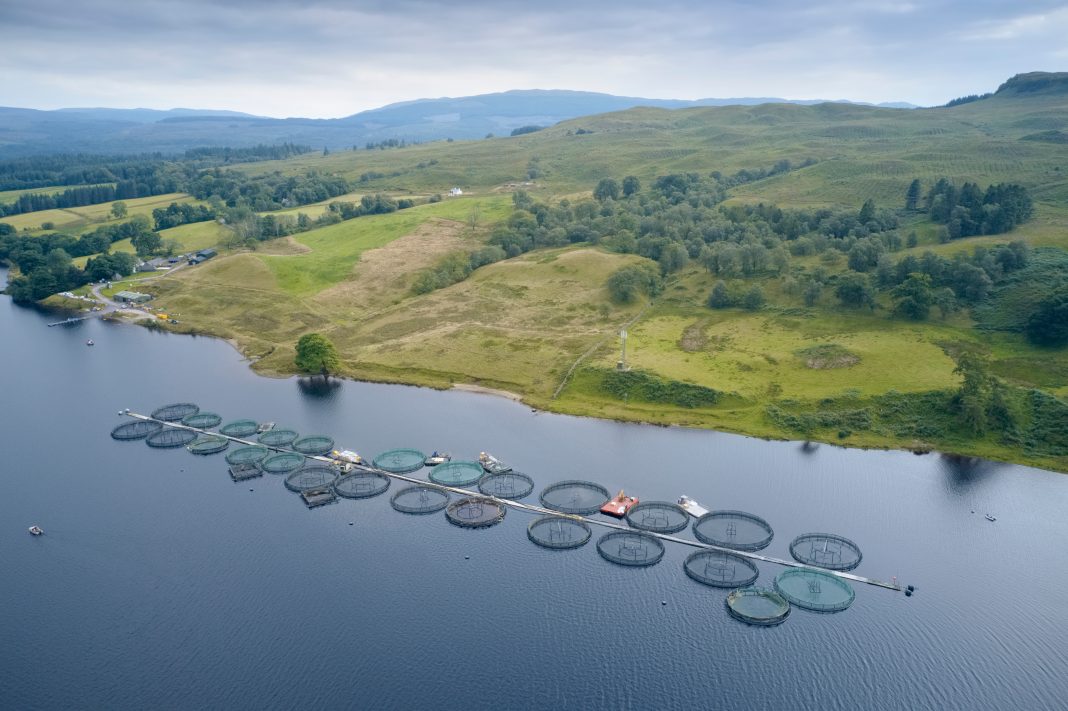 On Wednesday 13th July, Working Peer in the House of Lords, Baron Trees, made history by hosting the UK’s first Parliamentary roundtable event to discuss fish welfare at the time of killing.  The session – coordinated by the All-Party Parliamentary Group on Animal Welfare, for which Lord Trees currently serves as co-chair – looked to discuss ‘Increasing welfare protections for farmed fish’. Lord Trees, a leader in his field, is widely recognised around the world for his contributions to both veterinary and tropical disease research, having served as the former President of the Royal College of Veterinary Surgeons and Vice-President at the European Veterinary Parasitology College.

The UK rears and slaughters up to 77 million fish each year, with Atlantic salmon, trout and other aquatic animal species farmed in significant numbers. There is growing recognition within the global scientific community that fish, cephalopods and decapods are able to experience pleasure and pain, much like cows, pigs, chickens and other farmed land animals who receive detailed welfare protections at the time of killing.

Despite this, aquatic animals receive very few protections under the law in the UK. They do not currently have specific provisions covering them under The Welfare of Farmed Animals at the Time of Killing (WATOK) Regulations, nor are there any statutory codes of practice or official guidance for the welfare requirements of farmed aquatic animals in the UK. The UK subscribes to the World Organisation for Animal Health’s ‘Aquatic Animal Health Code’ (OIE, 2010), which makes several prescriptions for WATOK and states that ‘effective stunning should be verified by the absence of consciousness.’ In the footage evidence obtained by Animal Equality and other animal advocacy organisations, it is apparent that these standards are not being met, and there is not currently sufficient oversight of slaughter facilities to enforce these standards.

The private, invite-only event was well attended, with individuals from the Animal Welfare Committee; the Scottish Government; the Department for Environment, Food and Rural Affairs; and many MPs joining.

During the event, Head of Veterinary Services at Scottish Sea Farms, Ronnie Soutar, said: “Legislation should be the base level which everybody has to conform to, and then we should aspire to do better than that. Nobody that I come across in aquaculture would deny that fish are sentient.” When asked about the prospect of CCTV being made mandatory, he showed support, stating that “it’s not something that I think would cause the majority of the sector any problem.”

Following the event, Lord Trees said: “British people care deeply about animal welfare, and fish are sentient animals which nowadays are farmed and consumed in very large numbers. Whilst the aquaculture industry itself has embraced external assurance schemes provided by the RSPCA and major retailers, there is an anomaly in that fish are not provided with the same levels of legal welfare protection as terrestrial farmed animals.” He added: “I am pleased to be hosting this first Parliamentary meeting on this important subject. It provides an opportunity for discussion between welfare bodies, the industry, Parliamentarians, and other stakeholders to play a part in shaping improvements for the welfare of tens of millions of fish every year.”

Mandatory inspections in fish slaughterhouses, thanks to group lobbying

In February 2021, international Animal Protection charity, Animal Equality, released footage captured covertly from Arnish farmed fish abattoir, operated by The Scottish Salmon Company. The scenes showed fish having their gills painfully cut while conscious and being bludgeoned up to seven times before being successfully stunned at slaughter; many salmon were filmed falling to the ground and were left to asphyxiate. Via a Freedom of Information request submitted by animal NGO, The Humane League UK, it was subsequently revealed that there were no welfare-oriented inspections taking place in fish abattoirs across the UK. As a result of lobbying efforts from animal protection organisations, prompted by Animal Equality’s initial investigation, the Animal Plant and Health Agency has since been instructed by the Scottish Government to conduct mandatory inspections into fish slaughterhouses for one year, with a view to potentially making inspections a permanent requirement.

In tandem, Animal Equality and the Conservative Animal Welfare Foundation produced a joint report in late 2021 making a case for CCTV to be mandated in all UK fish slaughterhouses. This ask is supported by 25 of the world’s leading aquatic animal experts who signed an open letter to the Animal Welfare Committee in December 2021, calling for urgent action to be taken. Signatories include: Dr Jonathan Balcombe, Author of ‘What a Fish Knows’; Dr Becca Franks of New York University; Professor Steven Harnad, Editor of Journal of Animal Sentience; Dr Lynne Sneddon of the University of Gothenburg; and Dr John Webster, Founder Member of the Farm Animal Welfare Council.

Jenny Canham, Campaigns and Public Affairs Specialist at Animal Equality UK, says: “Fish are currently being failed by the UK legal system. The scientific community agrees that fish feel pain and can suffer, so it’s shocking that they receive such little regard in law. There really is no logical reason for this.” She added: “It’s clear that there is a desperate need for increased legal protections and enforcement of those laws. The extreme suffering of fish is currently being exposed by animal protection organisations, including Animal Equality. Regular inspections and mandatory CCTV are vital to paint a clearer picture of what is truly currently going on in fish slaughterhouses. This is the very least that fish deserve.”

Philip Mansbridge, UK Director of Programs at the Conservative Animal Welfare Foundation, added, “With an estimated up to 77 million fish farmed each year in the UK, it just simply isn’t logical that fish do not receive the same legal protections as terrestrial farmed animals. To really ensure their welfare, we need to stop relying on industry codes and start relying on official regulations. Additionally, we need to focus on the welfare of the 15 million so-called ‘cleaner fish’; produced in Scotland each year for the salmon industry – all of which either die whilst in use, or are slaughtered at the end of the salmon cycle.”

Amro Hussain, Senior Public Affairs Lead at The Humane League UK, also added, “Estimates indicate that more fish are farmed every year in the UK than cows, pigs and sheep combined. Despite this, fish are severely neglected by animal welfare authorities. Legal provisions that purportedly protect fish are vague, and there is no official guidance on how these animals should be kept or slaughtered. Government welfare guides exist for rabbits but not for fish, the second most farmed vertebrate animal in the country. There is no scientific basis for this neglect of animals which have been proven to feel fear and pain. They deserve detailed legal protection.”

The Animal Welfare Committee is currently considering the issue of the welfare of farmed fish at the time of killing and is exploring the need for changes to current practice or legislation. The findings are expected to be published later this year.