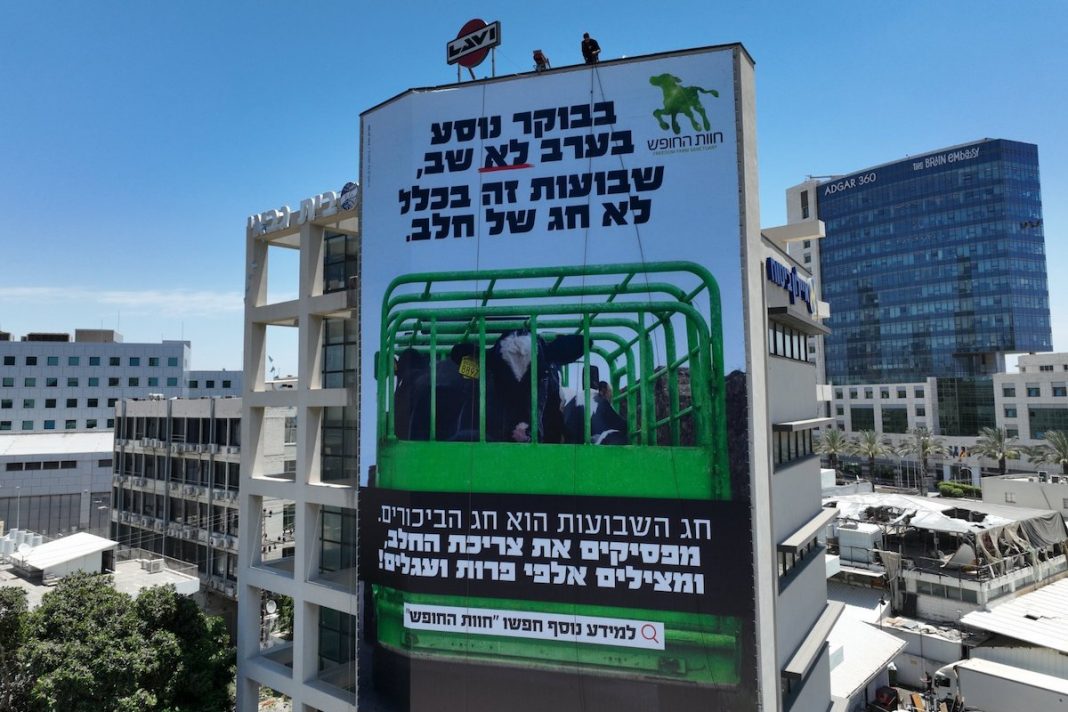 An exclusive campaign informing the Israeli public “Shavuot isn’t a dairy holiday” was released this year for the first time.

Shavuot is a two-day holiday associated with dairy foods and begins on the evening of June 4th each year, in celebration of God giving the Torah to the people.  The groundbreaking campaign launched by Freedom Farm Sanctuary was created to encourage people to refrain from purchasing dairy products for this year’s holiday and in doing so, save thousands of animals in the food industry and reduce the environmental impact of the dairy industry on the planet.

Taking compassion to the streets

Thanks to successful crowdfunding and a generous donor, the nonprofit organisation was able to counter the endless commercials of dairy companies to restore the true meaning of the holiday of Shavuot and celebrate Matan Torah as the Festival of First Fruits, also known as the Harvest Festival.  They took their compassionate message to the streets of Tel Aviv, Jerusalem, and Haifa, including the major inter-city highway of Ayalon and in the two weeks leading up to the Shavuot, Israelis were to encounter hundreds of billboards and radio commercials across Israel, encouraging them to avoid dairy consumption during this period.

The signage displayed an image of a cow confined in a green vehicle, followed by a caption resembling a well-known children’s song, spreading the message that Shavuot did not even originate as a dairy holiday and encouraging the public to stop dairy consumption and save thousands of cows and calves.

“Freedom Farm Sanctuary’s work is to expand the circle of compassion towards animals”, said co-founder Meital Ben Ari. “Our most fundamental motivation is the love of humans and recognition of the inherent good in every one of us”.

The campaign also included a promotional video intended for broadcasting on television and radio.  Not everyone was happy about the campaign, however. In a blow to the organisation and its supporters, the Israeli broadcasting authorities made the decision to ban the campaign’s commercial from its stations, claiming it was ‘a controversial topic that may offend the public’s feelings’.

In return, Freedom Farm Sanctuary sent a press release, sharing the authorities’ decision with the public, and raising important questions regarding freedom of speech. How was it that only the opinion of the dairy companies was allowed to be heard, while a nonprofit organisation that wished to raise awareness for animal rights was being silenced? Why were the feelings of vegetarians and vegans ignored when they were flooded with animal by-products advertisements? Why was it wrong to talk about the true meaning of the Shavuot holiday, or share vital information about how dairy production harms animals, human beings, and Planet Earth?

The press release initiated extensive media coverage and public interest regarding the broadcasting authorities’ commercial ban, with advocates for freedom of speech and human rights furious about the unjust decision, regardless of their eating habits.

Adit Romano, Freedom Farm Sanctuary’s co-founder, explained: “Unfortunately, over the years, dairy companies have invested millions of shekels in commercials, songs, and fictional tales to convince people that Shavuot is a dairy holiday. Every year these companies set out to convince us to consume dairy products, and Freedom Farm Sanctuary is the first to come forth and clarify that according to the Torah, Shavuot isn’t even a dairy holiday. Many of us are unaware of the environmental harm and the misery and pain the dairy industry is causing for animals, and it’s unfortunate that their voice is being silenced. We promised to speak for the animals in the industries, and we shall keep our promise.”