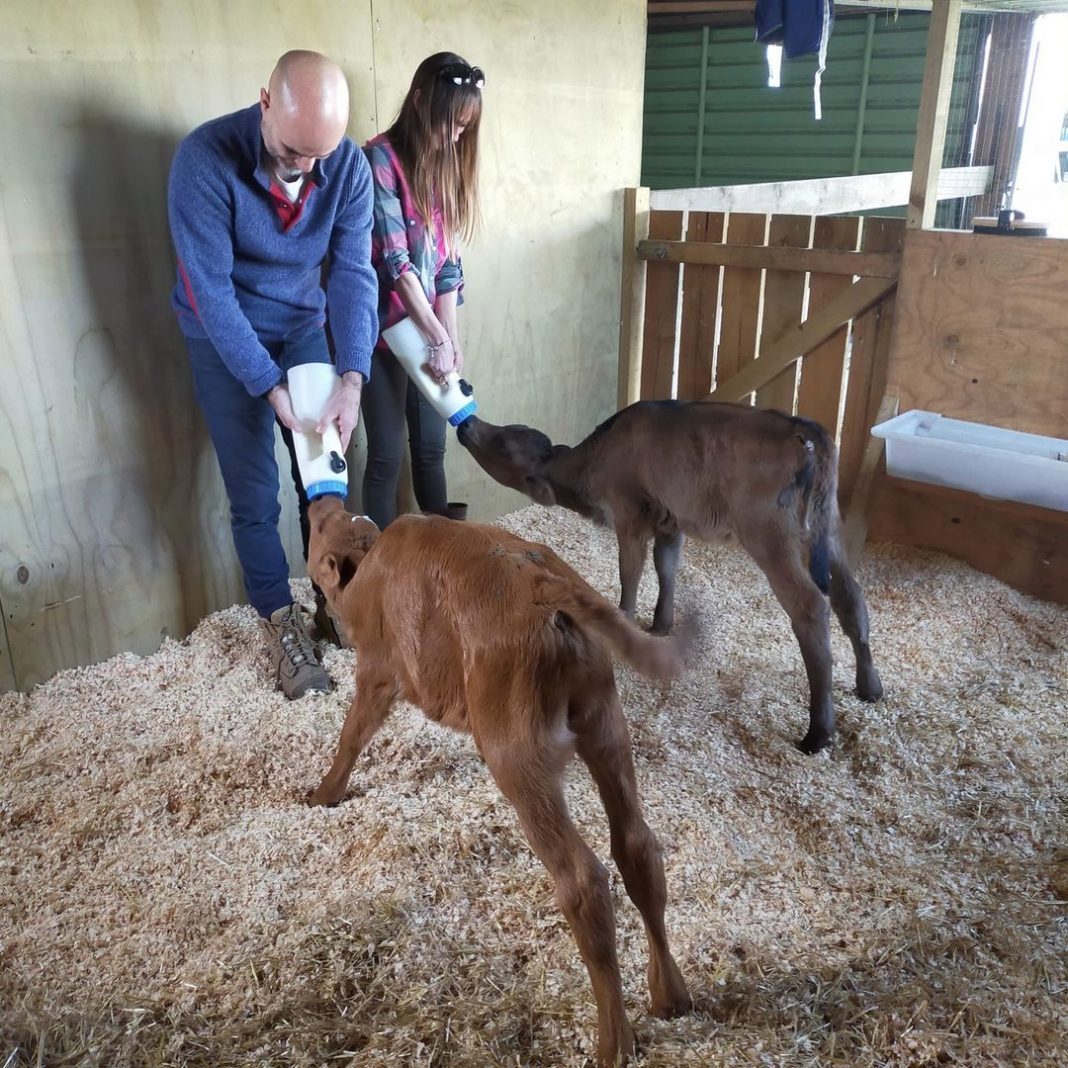 It’s the season again –and I am not talking about Christmas. Bobby calf season is that time of year in New Zealand where hundreds of thousands of tiny 4–10-day old calves are sent to the slaughterhouse. With a small team of animal advocates I rescue bobby calves and rehome them to non-breeding, no kill homes. This weekend we rescued two little girl calves.

This work is so hard. It is heartbreaking, joyful, challenging and exhausting. It is loving and charming. And it is resource intensive.I call my little rescue organisation Starfish Bobby Calf Project. This is named after the tale of the person throwing stranded starfish back into the sea to save their lives. Upon being questioned as to why he would bother when there were too many to make a difference the child replied, “it makes a difference to this one.

And yet even though we do make a difference it still hurts.It breaks my heart into a million pieces when I think of the ones who can’t be saved.There is no way to sugar coat it. It is a one-way uncomfortable trip to death row for these gorgeous neonates who are not rescued and instead put on the bobby truck.The dirty little secret of dairy Let’s be exact with numbers. I turned to the 2020/21 edition of New Zealand Dairy Statistics. This is the dairy industries census put out by annually by Livestock Improvement Corporation Limited & Dairy NZ Limited. Despite having an in-depth statistical overview of herd production, in-calf rates, herd breeding worth, and live weight per breed there was nothing on bobby calves.Their invisibility doesn’t surprise me. Bobby calves are the dirty little secret of dairy that just keeps getting exposed like a recurrent festering wound. Having no luck on official dairying pages I turned to the Ministry for Primary Industries (MPI) website. Here the statistics lie buried deep in a spreadsheet -but they are nonetheless there for all to see. In the 2020/2021 season 1,854,898 tiny calves were sent to their deaths. This is just slightly lower than the 2019/2021 season of 1,874,388 calves. When I say slightly, what I mean is 19,490 calves. On average over the course of a year New Zealand sends about 1.9 million calves to the slaughterhouse. Most of these calves are killed between the months of July, August, September and October. This includes mostly boy calves -who obviously can’t be used in a dairy replacement herd. However, it also includes some girl calves that are surplus to requirements.

A bloodbath of grand proportions So far in 2022 MPI reports that 144,024 calves have been killed. That means that over the next two months there are a lot of calves going to slaughter. We are just at the beginning of the season.I don’t like to have to say it, but it is glaringly obvious. This is a bloodbath of grand proportions, and it is beyond sad. I hear whispers of humane death. I see dead calves. Literally I see dead calves. They are lying in piles ready for the slinky truck to pick up. Some don’t even live long enough to go on the bobby truck.

And with every bottle of milk brought I feel public consent for this horrendous act.It is natural to want to turn away from evident animal cruelty. Especially when it is justified on such a large scale. It is in New Zealander’s cultural DNA as a dairying country. But we need to open our eyes to this and make serious shifts away from dairying toward sustainable plant-based regenerative agriculture.The truth of the ‘humane’ myth But back to the bobbies who are at the heart of this serious ethical issue. I want to address the humane myth –because what happens to bobbies is not humane. Legally they are allowed to be transported for 8 hours and they can go up to 24 hours without being offered milk. I have been involved in bobby calf rescue. I have heard stories from truck drivers of sick calves drowning en route in the urine that puddles on the floors of the trucks. These noisy, swaying and unstable dirty trucks are not humane.

Bobby calves have been taken from their mothers –usually within 24 hours of birth. Farmers give them colostrum and keep them for between 4-10 days before sending them on a bobby truck. During that time, they may get sick. Bugs can sweep through calf sheds and do so on a regular basis.I hear stories told to me anecdotally by people in the industry. I can never un hear them. Neither can I unsee the sick calves I have received from farmers and nursed to health. I only ever lost one. Of course, many farmers are doing their best with a lot of calves over a short period of time. They are part of a brutal system that needs to end. A mass slaughter of baby calves like nowhere else in the world

A report by Greg Hamill for the Kellogg Rural Leadership Programme draws our attention to how New Zealand is the only country in the world that has a large seasonal pool of calves killed in a short time. I don’t think, however, that other countries are squeaky clean. The practice of rearing 450,000 calves in small cages for their veal in America is a very cruel practice.Yet the fact remains that no other country in the world except for New Zealand sends baby calves to slaughter en masse over a three-month period. Greg Hamill rightfully notes that this is an ethical issue and that it is risking our social license to operate dairy. Especially since animals are recognised as sentient under New Zealand law.Yet I part company with him on the idea that dairying is a viable enterprise in New Zealand. There are so many reasons to give up dairying in New Zealand. It’s bad for our waterways and environment and is unsustainable.For me, the biggest reason for giving up dairy is also the littlest. Little dairy calves don’t deserve such a cruel short life.I know I am a tiny thorn in the side to dairy farming. I don’t make enough difference to even dent their profit margins. But I won’t give up. I will keep throwing those little starfishes back in the sea.

Maybe one day, one will make a splash loud enough to wake up the complacency of the public. Swim, little starfish, swim.Donate to Starfish Bobby Calf Project and help save babies from slaughter! ‘Bobby calves’ are baby calves who are destined for slaughter as young as four days old. These babies often endure a truck ride of up to 8 hours and go without any milk for 24 hours before being killed. Starfish Bobby Calf Project is a vegan rescue organisation based in New Zealand who do vital work in rescuing some of these innocent animals. They have been making a positive difference to the lives of bobby calves since 2015, saving lives and providing them with forever safe homes. The team at Starfish provide all the necessary love and care for these babies but they urgently need your support in helping them cover costs of transport, milk powder and vet bills, which is often needed in the rehabilitation of these vulnerable calves.In New Zealand nearly 2 million baby calves are killed every year.

Please support the efforts of Starfish Bobby Calf Project in helping to save some of them.

Yes! I want to donate to Starfish Bobby Calf Project.