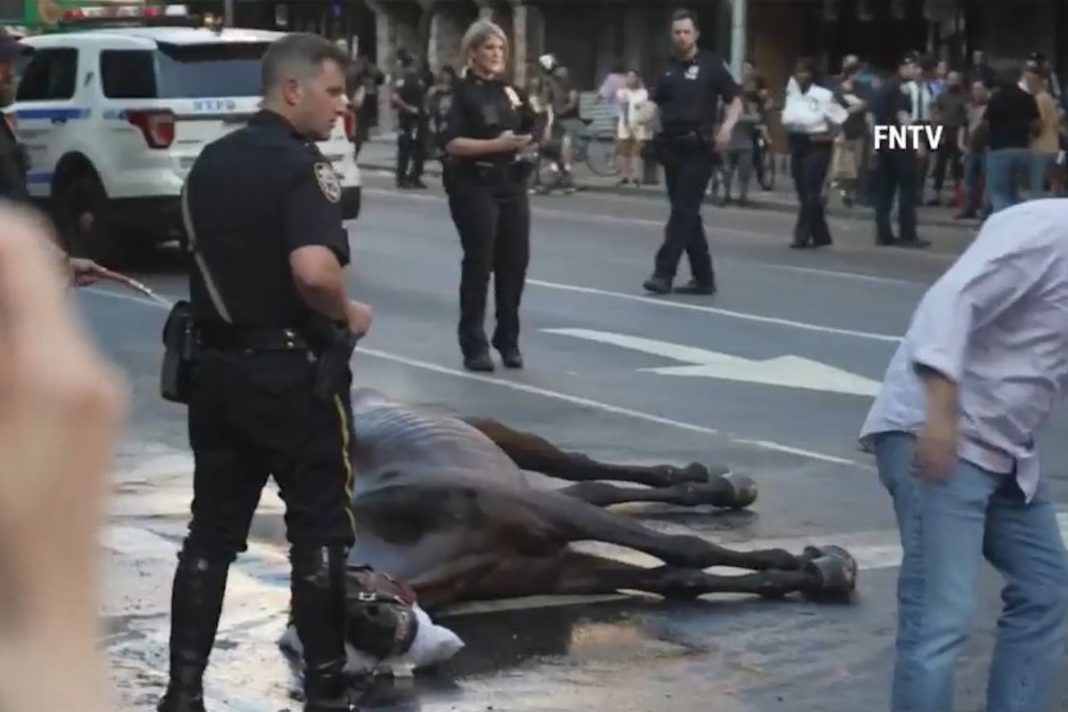 According to the vets who inspected him, Ryder, the NYC Carriage Horse who collapsed in midtown Manhattan in Hell’s Kitchen on 10th August 2022, is around 26 years old, too old to be licensed as a carriage horse in New York City. He laid on Ninth Avenue for over an hour — with no veterinary care — while his driver reportedly slapped him, whipped him, and screamed at him to get up.

A veterinarian issued a preliminary diagnosis of EPM, or Equine Protozoal Myeloencephalitis, a parasitical disease. Christina Hansen, a spokesperson for the carriage drivers’ union, said, “The neurological effects of the EPM caused the horse to stumble and fall as the carriage driver is trying to change lanes and turn here on 45th street on the way home…And once he was down, he had difficulty getting up again from the neurological symptoms of EPM.” Ryder has now been transferred to new carers and is receiving treatment.

The incident has renewed calls to ban horse-drawn carriages in the city. Rachel Ejsmont, an animal rights activist, said, “They don’t belong in the city! It has to stop. We’re fed up, it’s traumatizing for us.” There are 200 licensed carriage horses in NYC forced to work by 130 active drivers, but if a new bill by Queens City Council member Robert Holden is passed, it could make them switch to electric carriages, as has happened in other cities. Holden said, “Where they have the electric carriages now, the drivers love it because they work in the heat, they can work in the cold…This is 2022, not 1822.” Chicago, Salt Lake City, and Melbourne have now banned horse-drawn carriages. Others, like Prague and  Palma de Mallorca, are starting to phase them out.