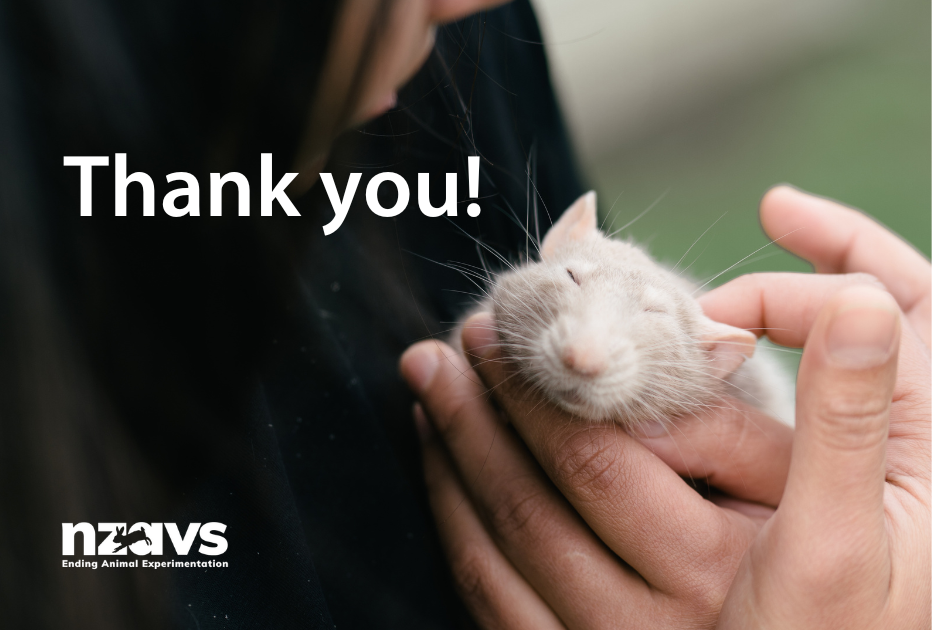 Can you spare a few minutes every so often to write a letter and help change the future for animals being used in science?

NZAVS is calling upon compassionate people who want to see an end to animal experimentation to take an action in the form of writing to an important decision-maker. Earlier this year, they submitted a petition of over 22,000 signatures as part of their Striking at the Source campaign, calling on the NZ Government to start prioritising non-animal-based research methods and replacing the use of animals in science. Since then, they have been working behind the scenes to convince important decision-makers that now is the time to make a change for animals. It is time to replace animals used in cruel experiments with superior technologies!

‘We’re making good progress and believe that we will do a good job of getting key decision-makers to see that New Zealand would be better off if we started upgrading our science by getting animals out of experiments”, says Executive Director, Tara Jackson. “But they’re going to need to know the public is behind us, which is why we are mobilizing everyone to send out messages.  We are being strategic about this, however. We don’t want everyone to send a message all at once – we need to spread the messages out and make sure that we’re sustaining the pressure.”

“We know that many people are too busy to write a new letter every week, so instead, we’ll be taking turns asking different people every week to take action.

This special assignment will be all about funding – with the NZ Government deciding on the budgets for the year soon, now is the time to ask for funds to be allocated for replacing animals used in science. How can we move science forward if there is barely any money available for using and developing animal-free research methods?”

More information about the current state of funding:

“It’s crucial that we have money set aside in the government budget to fund the replacement of animals used in science”, says Tara. “Once we remove this barrier, researchers will have access to funding that will help us see an end to animal experimentation. But we need help to make this happen!”

Want to help NZAVS keep up the pressure where it counts?

To stay informed and be notified when you have been selected to help out with a special assignment, sign up here.