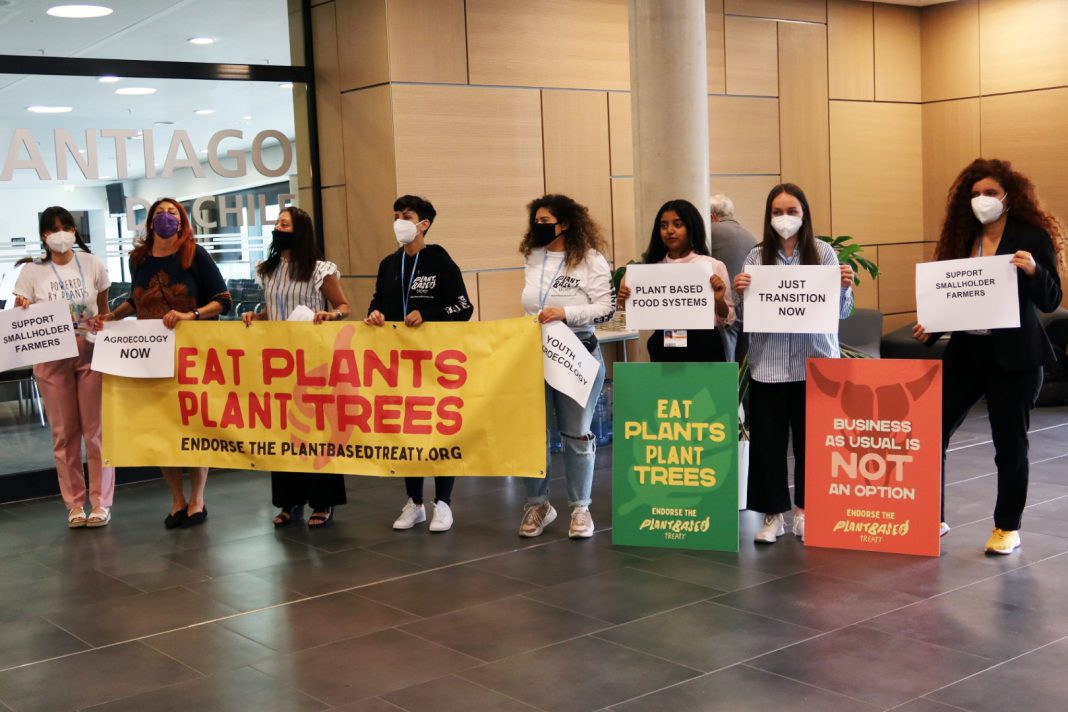 A delegation of seven representatives from the Plant Based Treaty will be attending COP27 in Egypt. They comprise a global team: Yael Gabay from Israel and Hoshimi Sakai from Georgia (heads of the delegation), Aprajita Ashish from India, Nilgun Egin from Turkey, Maximilian Weiss and Ludmilla Widmer from Germany, and Lia Philips from UK.

COP27 urged to acknowledge the role of animal agriculture

Nilgun Egin, Plant Based Treaty campaigner, says, ‘The climate crisis is impacting us now and I feel a duty to do all I can to stop it. Negotiating a Plant Based Treaty is essential to combat the crisis and it is imperative COP27 embraces plant-based solutions and acknowledges the role of animal agriculture.’

Yael Gabay, Plant Based Treaty campaign coordinator, says, ‘I’m going to COP27 to remind delegates and key stakeholders that food systems have to be put at the forefront of all climate negotiations. It’s imperative for our survival to move towards a plant based diet, shift away from animal agriculture and negotiate a global Plant Based Treaty.’

Ludmilla Widmer, Plant Based Treaty campaigner, says, “Animal agriculture is highly neglected as a main contributor to the climate crisis in the political landscape, even though the science is clear. We are here to make sure it is not ignored any longer and a transition to plant-based food systems is seriously negotiated.”

Potential to reduce land use by 76% with plant-based diets

Their mission is to make sure climate science on the methane emergency, land use and plant-based agro-ecological farming is correctly communicated. If we switched to plant-based diets, we could reduce our land use by 76% allowing us to rewild and restore carbon sinks.

Plant Based Treaty has released six science-based Position Papers calling for plant-based solution The position papers draw on the work of the IPCC and George Monbiot’s Regenesis (Allen Lane, 2022).  Monbiot, a British journalist and author known for his work on environmental and political issues is featured in each of the position papers, shows how land use is the most important environmental issue we face. He said, “Every hectare of land we use for extractive industries is a hectare that can’t support wild forests, savannahs, wetlands, natural grasslands and other crucial ecosystems. And farming swallows far more land than any other human activity.”

What is the Plant Based Treaty?

A bottom-up pressure coalition of individuals, groups, businesses and cities is calling for a global Plant Based Treaty with three core principles to (1) relinquish the expansion of animal agriculture, (2) promote a shift to healthy sustainable plant-based diets through public education and redirecting subsidies and taxation, and (3) reforest and rewild the Earth and restore carbon sinks to absorb carbon from the atmosphere. Governments are being urged to support food justice, help farmers in a just transition to plant-based agroecological agriculture and rewild the Earth so we can live safely and ethically within our planetary boundaries.

The Plant-Based Treaty has been endorsed by 60,000 individuals, 2000 groups and businesses and 20 cities including the latest to sign on, Los Angeles.

You can endorse the Plant Based Treaty as an individual or business/organisation here.