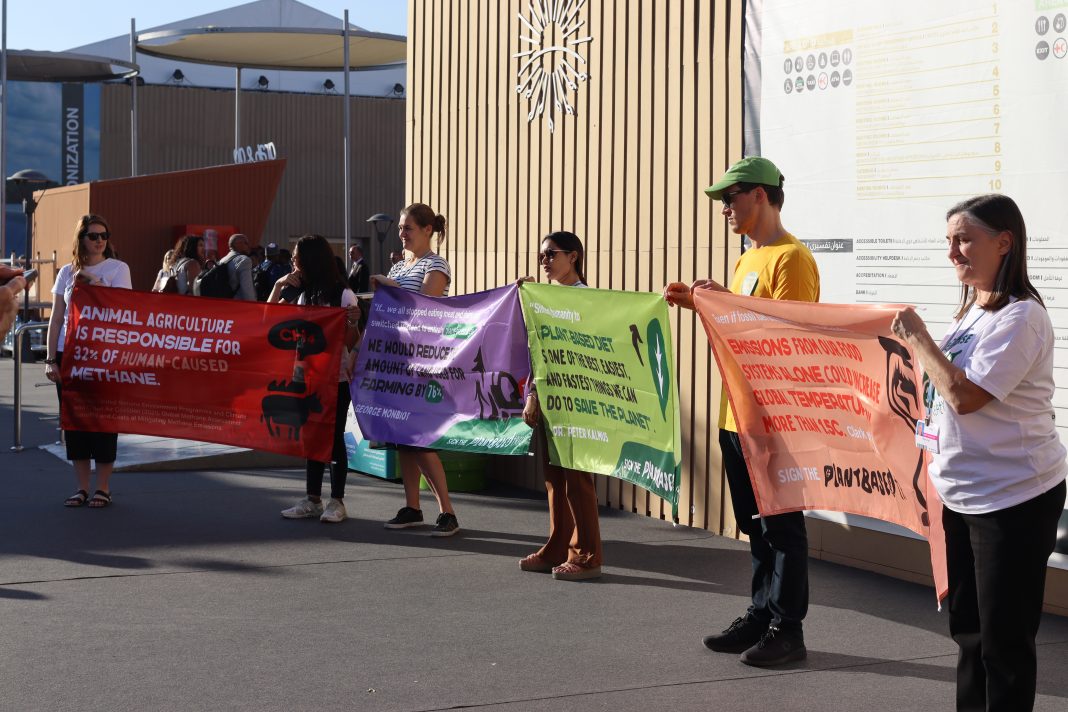 More than a dozen climate activists unfurled banners and launched protest chants outside the COP27 Blue Zone on November 11th to call for Plant Based Treaty negotiations as part of an emergency response package to tackle escalating greenhouse gas emissions.

During the protest, campaigners could be heard chanting the Plant Based Treaty motto, ‘Eat plants, plant trees,’ and ‘What do we want? Plant-Based Treaty! When do we want it? Now!’

The group was protesting against the Koronivia Joint on Agriculture meeting held on that day, and two side events:

At 1.10.24hr into the Global Dairy Platform panel, Plant Based Treaty campaigner Hoshimi Sakai from Japan quizzed panellists about why they are pursuing dairy production during a methane emergency when all the nutrients we need can be obtained from plants. In addition, dairy production is being expanded in countries such as Japan and Africa, where populations have high levels of lactose intolerance.

Shockingly, the panel which included representatives from European dairy giant Arla and Dairy Farmers of America, fell silent on the methane emergency. Data from the 2021 UN Methane Assessment Report reveals animal agriculture, particularly from cattle as the largest source of human-caused methane emissions, responsible for 32%. Climate campaigners and leading scientists say will be impossible to reduce methane emissions to safe levels without a transition to a plant-based food system.

In addition, panel member Margrethe Jeanette Jonkman, from Friesland Campina, attempted to greenwash the dairy industry when she stated, ‘dairy can play a dominant role in a sustainable diet’. She further trivialized whole regions where people suffer lactose intolerance by suggesting they can, ‘drink 200ml of milk a day without a problem.”

“Cooking animals is literally cooking the planet and a death sentence for us all. The consumption of meat, dairy and eggs have contributed to catastrophic flooding, killer heatwaves and droughts which leave our food system on the verge of collapse,” says Hoshimi Sakai, Plant Based Treaty campaigner from Japan, “This is a do-or-die decade and we are bringing the plant-based revolution in this fight for our lives against the methane emergency.”

The November 11th protest coincided with an open letter signed by more than 230 groups, businesses, academics and politicians calling for world leaders to negotiate a Plant Based Treaty at COP27’s Agriculture and Adaptation Day on November 12.