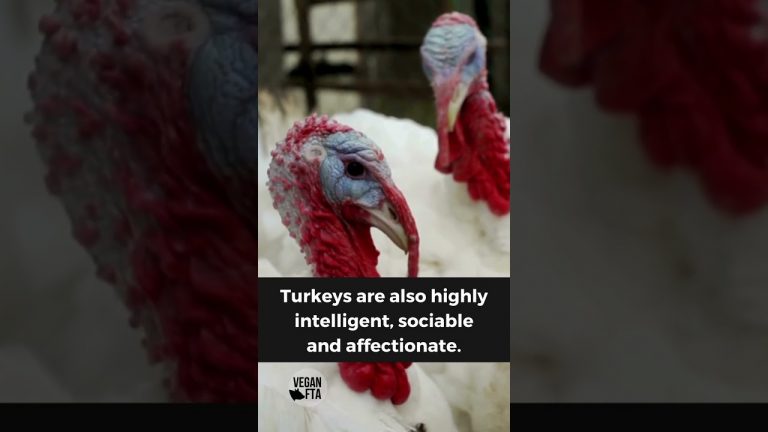 Turkeys are emotional, sensitive and sentient beings. Like other animals, they deserve a dignified life for themselves, free of exploitation.

Turkeys have highly developed senses, especially sight, hearing, and touch. Their vision captures colors, covers 270 degrees, and is estimated to be 3 times better than a human’s. It is also believed that they can hear more distant and lower-frequency sounds than humans. Its beak is very sensitive to touch, similar to the hands of primates. Although they spend most of their time on the ground, wild turkeys can fly short distances at 55 mph and they sleep in trees.

Turkeys have been shown to be highly intelligent and sensitive. Among other emotions, they feel pain and pleasure and like to listen to music. Also, these birds are highly sociable. They can differentiate between individuals, who each have a unique voice. They are also very affectionate and form lasting friendships.

The origin of Thanksgiving Day is doubtful and there are various versions of it, however, it is known that it was officially proclaimed as an American national holiday by Abraham Lincoln in 1863. Initially, it was celebrated on the last Thursday of every November, but since 1941 it has been established on the fourth Thursday of the same month. In Canada, Thanksgiving is celebrated every second Monday in October.

It is believed that the tradition of eating turkey on this date is related to the fact that the wild turkeys population was very high in the region where the celebration originated, so they were easily hunted for dinner. However, currently, most of these birds are raised on intensive farms, where their space is very small, their needs are violated, and they suffer various ailments and diseases due to overcrowding and the stress to which they are constantly subjected.

In the US, a week before Thanksgiving, the ‘turkey pardon’ ceremony is held at the White House, in which the president ‘pardons’ two turkeys from being eaten — one main and one alternate in case the first one cannot attend the event for any reason. Afterward, the animals are sent to a farm, where they live safely for the rest of their lives.

It is said that this tradition of pardoning the turkey goes back to the time of Abraham Lincoln, who granted the request of his son Ted, who begged to spare the turkey destined for the presidential table, arguing that he had “as much right to live as anyone”. In 1963, J.F. Kennedy decided to follow the tradition, but it was not until 1989 that the ceremony became official with President George HW Bush. Since then, it has been held every year.

Thanksgiving is supposed to be a day of bonding between loved ones, to give thanks for the harvests of the year and the good things in life. But the daily suffering and early death of innocent beings cannot bring anything good. Just like Jack, turkeys — like the other animals — have the right to live in peace. They all deserve to be ‘pardoned’, or not caged up and bred for human benefit in the first place.