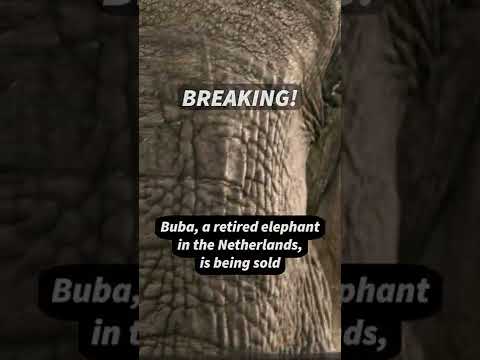 Buba, the last circus elephant in the Netherlands, which was owned by the Freiwald circus family and went into retirement by the 2015 ban on performing wild animals, is reported to have been sold to a Hungarian circus, to the dismay of animal rights activists who fought for her freedom.
Subscribe to our channel: http://bit.ly/2JkhLI0

In 2020, Dutch MPs voted to allow the elephant to remain with the circus family after the Freiwalds rejected a suggestion to move her to Elephant Haven, an elephant retirement home in France. But now, claiming they could no longer afford to look after her, the Freiwalds have sold Buba to the Kimba Elefant park in Hungary, owned by the Caselly circus family, where she will be forced to perform again.

The Dutch animal rights party Partij voor de Dieren, which is considering taking legal action to prevent the sale, said in a statement, “After all the sanctimonious drivel about allowing Buba to remain with her circus family in the Netherlands… Buba has been flogged to a park in Hungary where she will be forced to perform tricks again.”

Henk Staghouwer, the current agriculture minister accused of flouting the Dutch ban by allowing the sale of the 45-year-old African elephant, said to DutchNews.nl: “The objective of the 2015 ban on the use of wild animals in circuses was always to rehabilitate the animals in an environment with knowledgeable staff. It would not be in Buba’s best interest to be used to perform for an audience again.” This is not the first time this type of scandal has taken place in the country. The Netherlands found itself in a similar situation with Morgan the orca, which was sold to an amusement park in Tenerife where she has been bred against the rules of the transfer and had been forced to perform tricks. These cases go to show what happens if animals end up under the care of the zoo and circus industries under animal welfare pretences. If they remain in their custody, they will end up exploited, as this is what these industries do.

👉 Sign the pledge to Not to Visit Zoos & Aquariums: drove.com/.2yE8